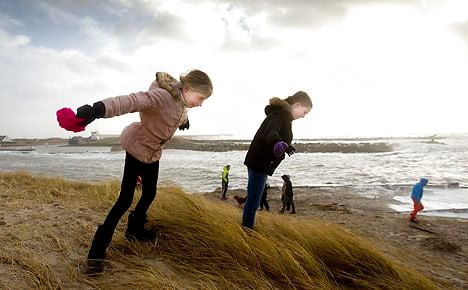 Egon whipped winds across Denmark for nearly 15 hours. Photo: Morten Stricker
Egon was a guest that didn’t want to leave, blowing strong winds over the country for nearly 15 hours and becoming the worst storm to hit Denmark since December 2013.
The strong winds from Egon and its proceeding storm Dagmar left behind raised sea levels that set records in parts of the country. The Limfjord fjord separating the island of Vendsyssel-Thy from the rest of Jutland recorded its highest ever levels. On Sunday morning, the fjord was 1.95 metres higher than its normal level and was continuing to rise.
Click here for a photo gallery from the storms
The city of Skive, which sits on the Skive Fjord, was also approaching record water levels as of Sunday morning.
The storms’ affects on the waters left a ferry carrying 150 passengers and 75 crew members from north Jutland waiting to dock in Norway for more than 24 hours.
The ferry departed north Jutland on Friday evening was supposed to arrive in Bergen, Norway at 1pm on Saturday. But damage to the Bergen harbour meant that the ferry could not dock there. It instead changed course for Stavanger, but had to give up those plans due to the raging storm. The ferry was forced to sail back and forth in Norway’s fjords overnight between Saturday and Sunday.
In the Copenhagen area, an S-train was evacuated late on Saturday after a tree fell across the tracks near Svanemøllen Station, damaging wires and the train’s front windscreen. No one was injured. Rail operator DSB said on Sunday morning that no trains would operate between Hellerup and Svanemøllen. DSB’s storm changes can be seen here.
Private emergency assistance company Falck reported that it responded to 275 calls related to the storm, most of them reports of damaged roofing and building materials.
Bridges, including the Øresund Bridge between Denmark and Sweden and the Great Belt Fixed Link (Storebæltsbroen) between Zealand and Funen, were forced to close during the storms but were reopened on Sunday morning.