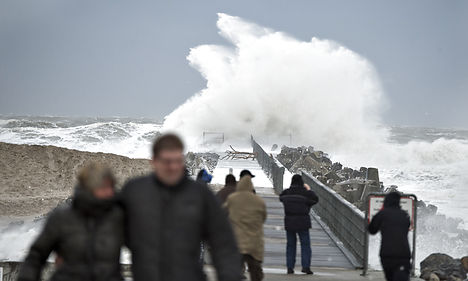 The west coast of Jutland is expected to get it the worst. Photo: Henning Bagger/Scanpix
Denmark awoke on Friday to the prospect of being smacked by a ‘double storm’ that will bring windy and rainy conditions to parts of the country.
Meteorology institute DMI warned that a storm dubbed Dagmar will strike Denmark’s west coast on Friday afternoon.
“During the course of Friday the wind will increase over Denmark from the west, so particularly the northwestern part of Jutland could be hit by winds of storm and hurricane strength,” DMI meteorologist Mogens Rønnebæk told BT.
On its website, DMI warned that winds could top 32 m/s in parts of Jutland. Although the western coast of Jutland will get it the worst, DMI has issued weather warnings for the whole of Denmark.
“Winds of hurricane strength mean that roof tiles fly off, large branches break, and trees can fall and block traffic ways. It is highly probable that bridges will need to be closed for traffic,” the warning reads.
DMI also warned about rising water levels along the Wadden Sea and on the island of Bornholm.
Hot on the heels of Dagmar will be a second low pressure front that will move in on Saturday morning, hitting Denmark with a one-two punch.
DMI’s Rønnebæk said that the second storm, dubbed Egon, won’t be as powerful as the first but warned that Denmark should prepare for a Saturday that will be just as windy as Friday.