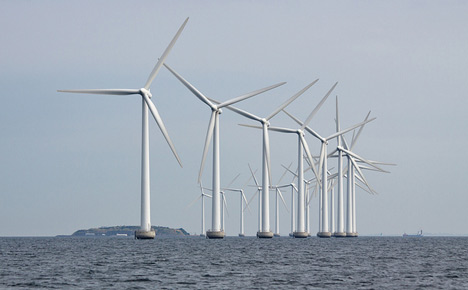 Photo: Stig Nygaard/Flickr
2014 was a record year for wind power in Denmark.
According to year-end numbers from Energinet.dk, 39 percent of all electricity used in Denmark last year was produced by wind power. The 2014 totals dipped slightly from the 41.2 percent of electricity generated by wind through the year’s first six months, but the climate minister said Denmark is still well on its way to achieving its energy goals.
“We will definitely hit our 2020 goals. We have set a one-of-a-kind world record. And it shows that we can reach our ultimate goal, namely to stop global warming,” Climate Minister Rasmus Helveg Petersen told broadcaster DR.
The Danish government has set the goal of having half of all electricity produced by wind power by 2020.
See also: Danish wind energy sets new record
According to Energinet.dk, there was nothing extraordinary about the amount of wind in 2014 and the increase in electricity production can be attributed in part to the more than 100 new offshore windmills that were installed in 2014.
The amount of electricity produced by wind varied throughout the year, from a high of 61.7 percent in January to a low of 23 percent in June.
Petersen said the wind record puts Denmark well on its way to phasing out coal, a process that he said in October he would like to see happen in just ten years.
See also: Denmark looks to ban coal in ten years
“I think this gives us some opportunities to get rid of coal sooner and get going with the green conversion,” he told DR.
But while wind power accounted for nearly 40 percent of Denmark’s electricity in 2014, wind only covers about five percent of the nation’s total energy use. According to the Danish Energy Association, electricity only makes up one tenth of Denmark’s total energy usage and the use of fossil fuels like oil, coal and natural gas still accounts for about three fourths of Denmark’s total energy use.
In order to truly reach the next level of sustainable energy, Aalborg University professor of energy planning Brian Vad Mathiesen said that Denmark’s combined heating and power plants need to invest in heat pump systems that run on wind-generated electricity rather than fossil fuels.
“It is moving too slowly with getting the heat pumps into our heating systems and thus integrated into the energy and heat sector. That becomes more and more pressing as the amount of wind energy increases,” he told DR.
Petersen responded by saying that the government has set aside 60 million kroner toward a heat pump trial programme meant to encourage Danish power plants to embrace the more climate-friendly, but currently more costly, solution.