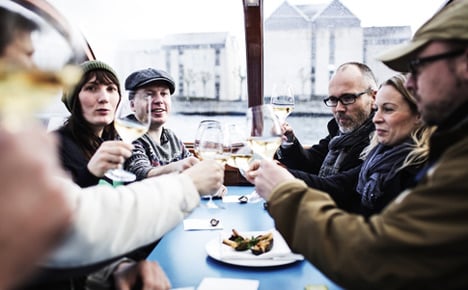 Danes are positive about what 2015 has in store. Rasmus Flindt Pedersen/Copenhagen Media Center
According to an international WIN/Gallup poll, the world is getting happier. The organisations’ End of Year Survey showed that 70 percent of people worldwide were happy with their life at the end of 2014, up from 60 percent last year.
Optimism for the new year also abounds, with 53 percent of respondents across 65 countries predicting that 2015 will be a better year than 2014.
In Denmark, that much-hyped haven of happiness, the WIN/Gallup poll shows that Danes may have been bypassed by Finns as the happiest in Europe but that doesn’t mean that they aren’t hopeful about the future.
Over three fourths of all Danes polled (76 percent) said that they feel either ‘very happy’ or ‘happy’ about their lives. The results are largely consist with Win/Gallup’s End of Year Survey for 2013, when 74 percent of Danish respondents said they were happy. The 2013 poll did not distinguish between ‘very happy’ and ‘happy’.
As 2014 drew to a close, 51 percent of Danish respondents felt that things would be better in 2015. This was a significant increase over the 44 percent of Danes who thought 2014 would be an improvement over 2013.
Danes are also quite optimistic about the nation’s financial situation. At the conclusion of 2014, 44 percent of Danes thought that the next year would be one of economic prosperity for the nation, once again an increase over the 38 percent of Danes who felt the same in the final days of 2013.
See also: Danish happiness is all in the genes: study
Happiness is steady, but fewer Danes are thriving
The rather upbeat results of Win/Gallup’s End of Year Survey were in contrast with a Gallup report from early December that showed that Danes’ high levels of reported life satisfaction are on the wane.
In that poll, 67 percent of Danes were classified as ‘thriving’, meaning that they ranked their current life at least a seven on a scale of 1-10 and predicted that their life satisfaction would hit eight or more in the next five years.
That number continued a downward slide since 2006, when 83 percent of Danes felt they were thriving.
“Denmark has led the world in thriving every year since 2006 with the single exception of 2012, when Iceland edged it out. Although its thriving percentage remains among the highest in the world, Denmark's decline has been dramatic. Of the 113 countries that Gallup studied each year between 2006 and 2013, only 10 had larger declines in percentage thriving than Denmark in that same time period,” Gallup wrote.
Danes like globalisation and their smartphones
The Win/Gallup End of Year 2014 Survey also revealed some other interesting things about Danes at the onset of 2015. For one, they are pretty evenly split on the issue of religion, with 42 percent viewing themselves as ‘a religious person’ and 40 percent as ‘not a religious person’.
Danes were also less willing than the global average to fight for their country. Just 37 percent of Danish respondents said that if a war involved Denmark they would be willing to fight for the country. The international average was around 60 percent.
The survey also showed that 41 percent of Danes think that globalisation is good for Denmark, while just 17 percent think it is bad.
Danes also seemed pleased with their electronic gadgets, with 76 percent of respondents saying that their smartphones and other devices at least somewhat enhance their lives.
The full Danish responses to Win/Gallup End of Year 2014 Survey can be found here.