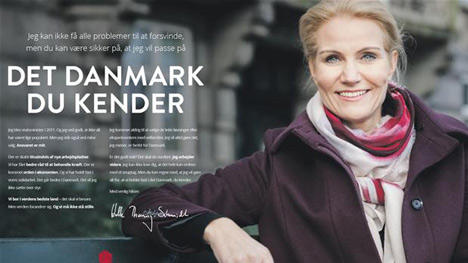 In the campaign, the PM vows to take care of "the Denmark you know". Ad: Socialdemokraterne
In case there was any chance they had forgotten, Danish voters were reminded over the weekend that 2015 is an election year.
PM Helle Thorning-Schmidt’s party, the Social Democrats, rolled out an extensive campaign online and in print, yet insisted that it wasn’t a sign that an election was around the corner.
The campaign, ‘The Denmark you know’ (Det Danmark du kender), is the party’s largest since the 2011 election and puts Thorning-Schmidt front and centre. Following the themes of her New Year's address, the PM uses the campaign to both acknowledge her detractors and defend her record.
"I became prime minister in 2011 and I know well that not everything has been equally popular. But I stand by my decisions. The responsibility is mine," Thorning-Schmidt reads in the campaign video, which features a shot of an angry protestor flipping the PM the bird.
See also: PM defends her record in New Year's speech
But despite a print ad greeting readers of the nation’s largest newspapers in a two-page spread and a video that was heavily discussed on social media, the Social Democrats’ political spokesman, Ole Hækkerup, denied that the party had gone into campaign mode.
“In her New Year’s speech, the prime minister rolled out some initiatives in relation to integration and in relation to growth, so we need to get going on those. But I will chance my luck and say that there is an election coming this year,” he told DR.
The PM must call for an election no later than September and Hækkerup said that only Thorning-Schmidt knows for sure when she will pull the trigger.
The Social Democrats’ ‘The Denmark you know’ campaign will also hit the nation’s train stations next week, so perhaps it was no surprise to see main opposition party Venstre roll out its own ads over the weekend as well. Venstre’s ad vowed that the party would “win back the keys” to Denmark.
So, is Denmark already in election mode? See the Social Democrats’ video below and judge for yourself.