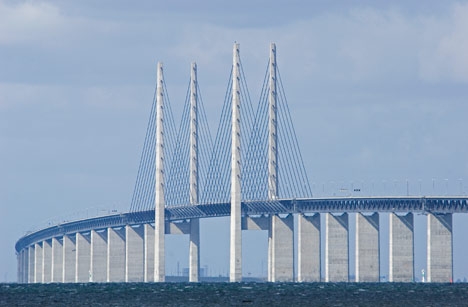 Wind-sensitive vehicles were warned to stay off the Øresund Bridge and five others on Friday. Photo: Colourbox
Powerful winds had Danish road authorities warning about driving over six different bridges on Friday morning.
The Danish Road Directorate (Vejdirekotaret) warned that all wind-sensitive vehicles should avoid the following bridges: Øresund Bridge, Little Belt Bridge, Langelands Bridge, Vejle Fjord Bridge, Svendborg Bridge and Siøsund Bridge.
The Little Belt Bridge warning is expected to be lifted by noon while the other warnings – with the exception of the Øresund Bridge – will be lifted during the course of the afternoon. The road authorities said the warning for the Øresund Bridge, which connects Denmark and Sweden, would remain in effect until 6pm.
According to meteorologists, parts of Denmark will experience storm-strength winds throughout the course of Friday, with the strongest winds expected along the nation’s coastlines. The northern and eastern parts of the country are expected to get it the worst, with speeds approaching 30 metres per second.