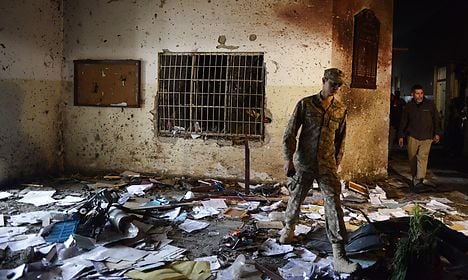 Danes are less fearful now than ten years ago that Denmark will suffer a terror attack like the one at this Pakistani school that left 141 people, almost all of them children, dead. AFP PHOTO / A MAJE
Despite the assessment of the Danish Security and Intelligence Service (PET) that Denmark faces an increased risk of a terror attack, Danes are less fearful of terrorism today than they were a decade ago.
An opinion poll carried out by Epinion for broadcaster DR showed that one in three Danes fear that Denmark will be targetted by a terrorist attack within the next year. That is down from nearly half of all Danes in August 2005.
In the new poll, 33 percent of respondents said they believed that Denmark would be hit by a terror attack, forty-two percent did not fear an attack and a quarter of respondents were unsure.
When the same question was posed in August 2005, 47 percent of Danes thought there would be a terror attack on Danish soil, 41 percent did not and 12 percent said they didn’t know.
The poll results come shortly after PET’s Center for Terror Analysis (CTA) released a new threat level assessment that carried a small but significant change in language. The CTA report stated that “the terror threat against Denmark is serious, but the risk of being the victim of a terror attack in Denmark is limited”.
In CTA’s previous threat level assessment, the agency called the risk of a terror attack “very limited”.
The head of PET, Jens Madsen, said that the language change was an intentional reflection of “negative developments in the current terror situation”.
“This is particularly due to the fact that we are continuing to see a stream of people leaving Denmark for the conflict in Syria and Iraq,” Madsen told DR.
The decreasing concern that Denmark will be targeted by terrorists also comes despite a Danish-Turkish militant who has fought alongside Isis in Syria warning that "Denmark is high up on the list" of the terror group's potential targets.
That Danes are less concerned about terrorism now than in 2005 came as now surprise to TrygFonden, a foundation that focuses on safety, health and well-being.
The foundation’s director of research said that terrorism is always much further down the list of Danes’ worries than more practical issues.
“The fear of terror is not something that keeps many Danes awake at night. Compared to the fear of an unexpected expense that you can’t pay or the fear of being homeless, it’s not something that affects their daily lives,” Anders Hede told DR.