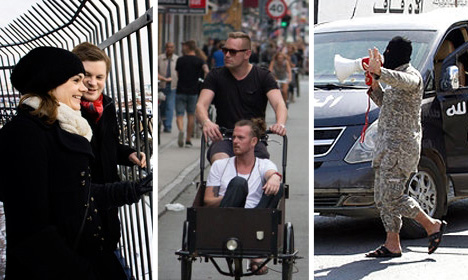 Here are hints about three of the stories that made the top ten. Photos: Ty Stange, Alex Berger, Scanpix
Having only launched at the end of June, our year-end look at the site’s most popular stories of 2014 only encompasses half of the year.
We weren't yet around for the January collapse of the coalition government spurred by the controversial partial sale of DONG Energy to Goldman Sachs. We weren't yet up and running for the Copenhagen Zoo’s headline-grabbing decision to put down Marius the giraffe, cut him up in front of curious children and then feed chunks of him to the zoo’s lions (nor for the subsequent decision to kill some of those very same lions, for that matter).
We missed one spending scandal after another engulf opposition Lars Løkke Rasmussen (including a lot of talk about his underwear) and we got started just after Denmark’s largest ever media scandal dominated the national headlines.
But just because we missed the first six months of 2014 doesn't mean that we had any shortage of widely read stories. As the year winds down to a close, we take a look back at The Local’s ten most-read stories of 2014.
Click here for The Local's ten most-read stories of 2014
From Russia to Isis, bestiality to bodypaint and one very successful light-hearted look at the Danes’ English skills, here are the stories that you enjoyed most this year.