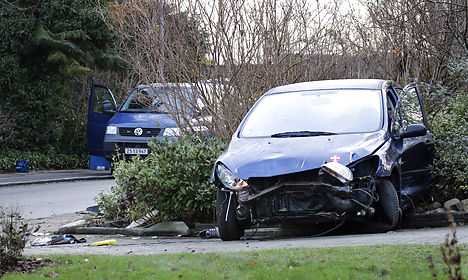 The Independent Police Complaints Authority has taken over the full investigation into Sunday's car chase and police shooting. Photo: Mathias Øgendal/Scanpix
The Independent Police Complaints Authority (Den Uafhængige Politiklagemyndighed – DUP) is investigating Sunday morning's rare police shooting and said that the victim was a 23-year-old from the nearby area who was driving a stolen car registered with the Danish military.
According to DUP, the man led police on a wild chase during which he ran into three different police vehicles and also drove his car into a police officer. When the man then pointed his vehicle at another officer, the officer fired the fatal shot.
See also: Man shot and killed by Danish police
The South Zealand and Lolland-Falster Police have not released information on what led to the car chase and instead directed all questions to DUP.
“We are taking over everything now that a person has been shot by the police and died as a result of a police action. And we will also carry out a regular investigation, just as the police would have done,” DUP spokesman Janus Rasmussen told Ritzau.
Once DUP has concluded its investigation, it will be up to the public prosecutor to decide if any charges should be filed in connection to the shooting.
Sunday morning’s fatal shooting took place in the Zealand town of Høng.