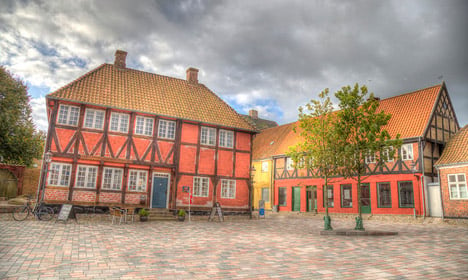 Could Ribe be 75 years older than previously thought? Photo: Christian/Flickr
Archaeologists agree that the town of Ribe in southwest Jutland is the oldest town in all of Scandinavia. Up until recently, they also agreed that the town dated back to the end of the eighth century. But a new study suggests that the historic town could actually be about 75 years older than previously believed.
Aarhus University researcher Sarah Croix is behind a new study that dates Ribe back to as early as 705, significantly earlier than previous studies.
"Ribe was where the urbanisation of all Scandinavia began. If Ribe began to become a town already in the early eighth century, this was long before the beginning of the Viking age, which sheds new light on our conception of this period," Croix told science site Videnskab.dk.
See also: New Viking fortress discovered in Denmark
Situated on Denmark’s west coast, Ribe was a vital trading centre in the early 700s, but archaeologists previously thought that trading in Ribe was confined to seasonal activities, perhaps only being visited once a year.
But Croix found evidence that Ribe was in fact permanently inhabited much earlier than previously thought. Among the signs of permanent habitation were textile-making tools and the remains of slabs used to grind grain.
Most importantly, Croix studied the remains of an entire house and found further clues that Ribe was inhabited year-round, including a floor made of hard-stamped clay that would have washed away in a temporary home, walls made of wickerwork and a structure that resembles other permanent homes in early Viking towns like Kaupang in Norway and Birka in Sweden.
See also: Danish burial mounds fleeced by grave robbers
Dagfinn Skre, a Norwegian professor at the Museum of Cultural History in Oslo, concluded in 2007 that Ribe didn't become a town until around 780. But he said Croix’s evidence of early inhabitance is very convincing.
"If this is right, it's a great result, and Croix has excellent arguments. But final confirmation of whether Ribe was a town already in the early eighth century will require more excavations," Skre told Videnskab.dk.
On that point, Croix agrees.
“I feel very sure that Ribe became a town earlier than we previously thought. I would be very glad if I got the chance to dig in Ribe – dig out the final proof myself,” she said.