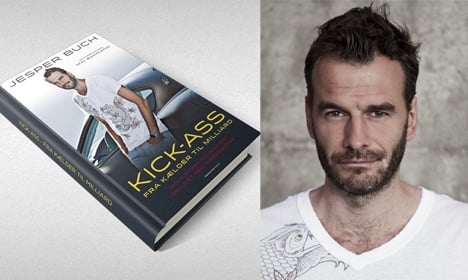 Jesper Buch's book Kick-Ass will be out in English shortly. Photos: Submitted
Jesper Buch started the fashion retailer Miinto in 2009, and has seen it expand at a rapid pace. Besides its office in Copenhagen, it now has local offices in Norway, Sweden and the Netherlands, millions of monthly visitors and 75 employees.
Buch moved to Spain in 2007 but continues to be one of the most active angel investors in Denmark. He also wrote a book, Kick-Ass, released in Danish in 2012 with an English version available soon.
How did you come up with your business idea?
I sold Just-Eat after ten years. The organisation had become very big. I came to realise that my strength lay in ideating and product development. It’s also only fun managing a company of maximum 300 employees. After that, it starts getting corporatised and my personality is very opposite to the corporate types. So, I decided to hand the business to a suitable successor and head down to Spain. Soon after, I started missing the action and that's when I met two 23-year-olds, Konrad Kirklo and Mike Radoor, who had passion burning in their eyes for starting an online fashion retailer. That's how Miinto was born.
See also: 'Trade your current life for a better one'
What were the initial challenges? How did you overcome them?
End users don't want to purchase in case an online retailer has low coverage. So, we had a sharp focus on bringing together as many clothing stores under our network as possible right from the start. We used to work 80 hours a week. That was possible, as we had given shares of the company to all the employees in the first team. It is a very effective strategy as it gets people to work for many hours on a lower salary.
We also had challenges with raising money and finding the right team as we experienced a high rate of growth. As you open up in other countries, responsibilities increase. There is always this threat that you won't get the kick-ass people you need in your team. Another challenge is that the tech team should follow the growth objectives and be able to translate it into workable solutions.
How has the journey been so far?
We started from scratch and reached our break-even point in three years. In 2011, after getting funded by a UK-based investment company, we entered Norway and Sweden. We adopted a more aggressive strategy and decided to enter the UK, US and Ireland as well.
However, the competition was very high and we burned a lot of money gaining and retaining consumers. So, we decided to re-focus on Denmark, Norway, Sweden and the Netherlands. We partnered up with a company in 2012 and after a very difficult phase of one and a half years, became profitable again with growth of 100 percent per year.
We now have a revenue in millions and plan to be the market leader in Scandinavia. We are in the top three in this market already and have about three million visitors every month on the website.
How has becoming an entrepreneur changed you personally?
I was among the first entrepreneurs from Denmark in the internet startup industry. I have always felt it to be a duty to share my knowledge with others and am happy to give back to the eco-system. I have been mentoring Miinto's founders, who were only 23 years when we started, and have spent many hours going over operations and strategy. Motivating them and sending them in the right direction has been my key focus.
I don't get my hands dirty in the day-to-day business any longer but instead help to give a strategic focus and direction to other entrepreneurs and rising stars.
Any other personal reflections and/or message to budding entrepreneurs?
Be prepared for a roller-coaster ride. Most entrepreneurs face similar fundamental challenges and I have been getting at least three emails every day for the last couple of years. The questions are often similar in nature. That's why I decided to write my book, Kick-Ass, in Danish. It has golden words of wisdom and will be available in English within the next two-three months.
Are you an entrepreneur in Denmark? Contact us and we might feature your story.