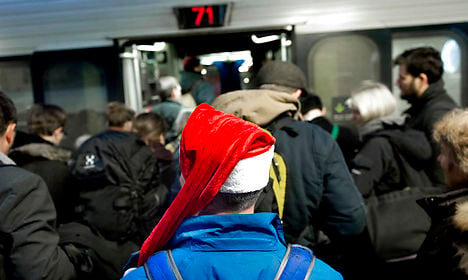 Christmas got off to a bad start for thousands of travellers who were affected by train cancellations and delays due to the bomb threat. Photo: Keld Navntoft/Scanpix
The year’s busiest day for train travel was massively disrupted by a bomb threat against Odense’s central train station.
The threat, delivered via text message at around 3pm, stopped traffic across Denmark for four hours before police determined it was a false alarm.
Odense is the largest city on the island of Funen, which connects Zealand and Jutland, making it a key connection point for train travel.
“We have searched the entire station centre with dogs and bomb-removal personnel and determine that there was no bomb. Therefore, we have called off the alarm so that trains can once again go through Odense,” Funen Police spokesman Erik Skov Knudsen said in a press release.
Even before the bomb threat, rail operator DSB said Friday would be the busiest day of the year, as Danes travel near and far for the Christmas holiday.
The bomb threat delayed thousands of passengers as DSB scrambled to mobilise 120 buses to keep travellers moving.
Although train traffic began again shortly after 7pm, extensive delays were still expected.
Information on delays and changes can be found on DSB’s website.
Nearly the exact same scenario played out last year when a man called a bomb threat to the same Odense station on December 22nd, 2013 – the Sunday before Christmas and the day that DSB said was its busiest of the year. In that instance, the threat was phoned in by a man who spoke English. Funen Police had not released any additional information about the current threat as of Friday night.