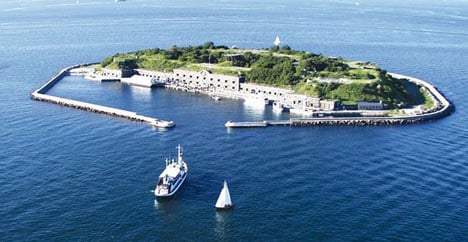 Start-up island? Photo: Startup Isle/Facebook
As soon as Tina Jonasen heard that the Øresund island Middelgrundsfortet was up for sale, she began been rallying to make it into a 'startup isle'. The social business and branding consultant has been trying to win over entrepreneurs who could potentially fund the purchase of the island and allow Denmark to lay claim to yet another 'first in the world' titles – if her campaign is successful.
Jonasen, who is an active networker and a certified accountant, has not only tried to win the support of leading entrepreneurs within Denmark but also across the Atlantic, mostly in the US. She has so far managed to get more than a thousand online signatures on a page dedicated to this initiative and has landed the support of leading entrepreneurs like former Microsoft technology evangelist Robert Scoble, and social entrepreneur Toke Kruse, among others.
"The island will be a perfect place for the expression of creativity, knowledge, innovation and job creation,” Jonasen told The Local.
“Denmark should turn it into a European refuge for entrepreneurs. We are the best in several things. Let's show them we can have such a concept and a place, too. Big names in the entrepreneurship world are interested in supporting this idea," she added.
There are plenty of naysayers as well who point out the challenges. But Jonasen says they have only strengthened her resolve.
"They point out that the island has no electricity and it can only be accessed by boat and that the water freezes in winter. I say, let's apply our startup mentality to solve these challenges and show them it's possible. Let's go green, build windmills and connect the island to the electricity grid. These activities will create a lot of employment in related industries. If we are successful, Denmark could boast of yet another 'first' for itself," Jonasen told The Local.
Jonasen is also not the only one with designs on Middelgrundsfortet. Another group is looking to purchase it for an artist's island, while a few wealthy businessmen are also eyeing it. But Jonasen feels the island is a perfect place for startups, as Copenhagen is not very far by boat and is already a hub for startups.
"Startups create employment. Making the island habitable will do the same. It's important people realise how interesting it will be, not only for the Danes but also the world, to discuss such a unique Danish story. We would also be able to attract more startups here," she adds.
About Middelgrundsfortet:
Middelgrundsfortet is a sea fort located in the Øresund between Copenhagen and Malmö, Sweden. It is the world’s largest artificial island without a connection to land. Constructed in 1890–1894 as a part of Copenhagen's sea fortifications, it is one of three artificial islands that were created to defend the entrance to Copenhagen's harbour.
Middelgrundsfortet was the largest sea fortress in the world, and is still the largest man-made island without abutment, with an area, including wave breakers, of approximately 70,000 square metres. Until 1984 the fortress was a military area. In 2002 it was sold to a private investor and in 2010 it was put on sale at a cost of 75 million kroner ($12.4 million). The asking price today is significantly lower at just 16.5 million kroner ($2.7 million).
The island includes 15,000 sqm of buildings and these days is mostly visited by tourists or rented out for large events and private parties.
Middelgrundsfortet can be accessed via ferry from Copenhagen’s Langelinie.

PARTNER CONTENT
VIDEO: Meet the people who are living the ‘Swedish dream’
Url copied to clipboard!