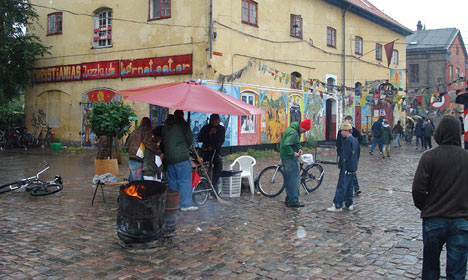 The siting of Russian jets and submarines is due to the Swedes smoking too much weed at Christiania's Pusher Street, the Russian ambassador said. Photo: mbtrama/Flickr
Russia's ambassador to Denmark on Wednesday made light of Swedish concerns over a Russian military jet's alleged near-miss with a passenger plane, suggesting Swedish authorities may have smoked too much cannabis.
"The Swedish authorities also recently said there was a submarine in their waters. There wasn't," Mikhail Vanin, Russia's ambassador in Copenhagen, told the Berlingske daily.
"Now they say again that they have seen something. I'm afraid the Swedes visit Pusher Street very often," he said, referring to the Christiania neighbourhood in Copenhagen known for its cannabis trade.
See also: Denmark wants answers on Russian 'near miss'
Swedish military said that a Russian military jet on Friday nearly collided with a commercial passenger plane south of the Swedish city of Malmö, shortly after taking off from Copenhagen International Airport.
Swedish and Danish fighter jets were scrambled in response to the Russian plane which came dangerously close to the passenger jet at less than nine kilometres (six miles), according to the Swedish military. Russia replied that their plane was "more than 70 kilometres" (43 miles) away.
The incident happened amid growing concern in the Baltic region over signs of more assertive Russian behaviour, including Russian planes simulating an attack on Bornholm and regularly skirting or violating the air space of neighbouring countries.
Sweden and Denmark summoned Russia's ambassadors on Monday to protest the incident.
The Russian ambassador admitted Russian planes were patrolling the area more frequently than they used to, but said that was probably "a response to Nato's activities and escalation in the region."
"I'm sure that if Nato reduces its activities in the region, we will do the same. Do not provoke the Russian bear," Vanin said.
Sweden's claims were part of "a very well orchestrated campaign" to portray Russia as "a very dangerous neighbour", he said.
See also: Denmark to Russia: We won't be intimidated
"But it's a very dangerous path that Swedish and some Danish campaigners have embarked on," he added.
Sweden, which is not a member of NATO, has said there is evidence that a mini submarine entered its waters in October, but that it hasn't been possible to confirm the vessel's nationality.
In September, Stockholm lodged a protest with Moscow after the incursion of two Russian fighter planes into the Nordic country's airspace.