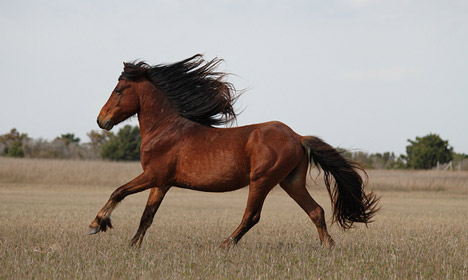 Photo: FireLizard5/Flickr
Humans tamed horses some 5,500 years ago, and an international study of ancient and modern horse genes Monday sheds light on the traits people saw as valuable, including speed, vigor and learning ability.
Researchers also discovered that a long-gone and previously unknown population of wild horses contributed a large chunk of genes to contemporary horses, according to the findings in the Proceedings of the National Academy of Sciences, a peer-reviewed US journal.
"We have identified at least 125 genes that have been modified between ancient and modern horses," lead researcher Ludovic Orlando, associate professor at the University of Copenhagen's Centre for GeoGenetics, told AFP.
"These are candidates for domestication genes, ie. genes that humans have selected in the course of horse domestication and management."
Their functions, Orlando said, are associated with locomotion, physiology and behavior. Ludovic Orlando. Photo: Nicola Lo Calzo
Of course, the Romans and Hittites who tamed horses to pull chariots and run in the cavalry thousands of years ago had no inkling of the specific genes they were manipulating. But researchers can now tell that breeding domestic horses with wild ones, a practice known as restocking from the wild, appears to account for at least 15 percent of the domestic horse genome, and possibly up to 60 percent.
They can also tell that the wild horses whose genetic signatures remain in contemporary horses were not related to the only breed of wild horses alive today, known as Przewalski's horses, an endangered species native to Mongolia.
Analyzing ancient DNA
Orlando's team, which in 2013 decoded the genome of a horse that was around 700,000 years old, this time set about analyzing horse DNA from about 16,000 to 43,000 years ago, long before domestication occurred.
They used fossilized bone dug up in Russia's Taymyr Peninsula, where frigid conditions allow for DNA to be preserved, and compared the finding to modern horse DNA.
"We provide the most extensive list of gene candidates that have been favored by humans following the domestication of horses," said co-author Beth Shapiro, head of the University of California, Santa Cruz Paleogenomics Lab.
She called the list "fascinating" because so many genes on it are involved in the development of muscle and bones.
"This probably reveals the genes that helped utilizing horses for transportation," she said.
Researchers also found a high level of harmful genetic mutations in modern horses, compared to their ancient ancestors, that likely accumulated as a result of inbreeding.
While the information may not help scientists find new treatments for diseases or ailments that horses face, Orlando said the study does help draw a more complete picture of the history of horses, mankind, and evolution, and could help improve the fate of the few remaining wild horses that exist today.
"Similar studies on Przewalski's horses could help monitoring this population and inform biologists about the best genetic path towards their conservation," he said.