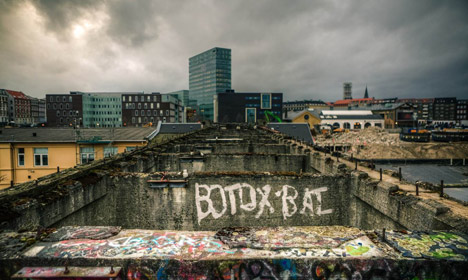 The former coal bridge will become a green connecter between the harbour and downtown. Photo: Miljøministeriet
Why should New York get all the cool stuff?
Taking inspiration from the city that never sleeps, Aarhus has announced plans to convert an abandoned bridge into a Danish version of The High Line, the New York city elevated park that turned a disused railway track into a public green space.
A 150-metre long bridge that was used to load coal into ships at Aarhus’s South Harbour will be converted into a nature area that will connect the harbour with downtown Aarhus.
“It is a fantastic idea to create a unique green area around the bridge, highlighted by an elevated park. It will both benefit Aarhus residents and create a new physical landmark for the city in the style of the famous High Line Park in New York,” Environment Minister Kirsten Brosbøl said.
See also: Star architect reveals Aarhus waterfront plans
A local association called Kulbroens Venner (The coal bridge’s friends) is behind the project to convert the bridge, which has gone unused for decades. The renovation will receive financial support from the Environment Ministry.
The renovation will get underway in the spring and the finished Aarhus High Line is expected to open in 2017.