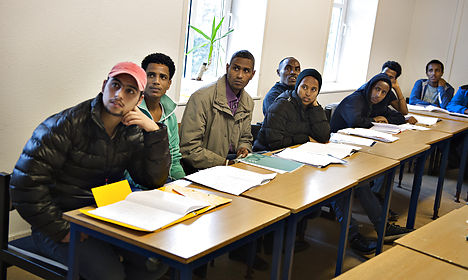 Two new opinion polls show that although Danes are split about immigration's effect on the country, many are tired of the negative debate. Photo: Henning Bagger/Scanpix
In a survey conducted by YouGov for Mandag Morgen magazine, 44 percent of Danes said they are sometimes “ashamed” by the national debate on immigration and foreigners. Meanwhile, a survey carried out by Gallup for Berlingske newspaper showed that 51 percent of Danes think that the debate over asylum seekers has gone too far.
In the latter poll, even supporters of opposition parties who have pushed for tighter restrictions and worse conditions for asylum seekers say that the tone of the debate has gone off track. Forty percent of Venstre supporters and 53 percent of Conservative voters disapprove of the way the topic of asylum is discussed in the public sphere.
The integration minister, Manu Sareen, said the results of the Gallup poll should serve as a wake-up call.
“We – especially those of us here in Christiansborg – should sometimes stop and think about how we talk about people. Words create realities and that means that we as politicians have a responsibility,” Sareen told Berlingske.
The results of the YouGov poll showed that Danes are almost evenly split when it comes to their overall views on immigration.
A narrow majority of 54 percent said that accepting immigrants is generally a bad thing for Denmark while 46 percent said that immigration was good for the country.
The 44 percent of Danes who “are sometimes ashamed by the Danish debate on foreigners” is a sign that the negative tone is out of whack with the average Dane, a political science professor told Mandag Morgen.
“The very negative parts of the debate on foreigners do not reflect Danes’ opinions of immigrants,” Jørgen Goul Andersen of Aalborg University said.
The results of the two polls may foreshadow an election cycle that focuses much more on immigration than the 2011 election did.
“The politicians target the most immigrant-sceptic voters because they can determine the outcome of the next election. Therefore, everyone is busy profiling themselves as sceptic of foreigners before the new election gets underway,” Andersen told Mandag Morgen.
Mandag Morgens’ YouGov poll also showed that the importance of immigration varies wildly amongst supporters of Denmark’s eight major political parties. While just 2 percent of Social Liberals (Radikale) supporters view immigration as the most important area for politicians to focus on, that number reaches 48 percent amongst Danish People’s Party voters. As a whole, just 17 percent of all poll respondents thought that immigration was Denmark’s most pressing issue.