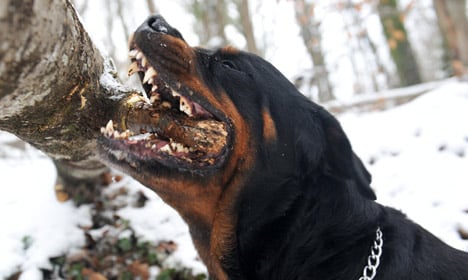 The Danish Nature Agency said that DNA tests showed that it was a dog, but they didn't say anything about the breed. Photo: Colourbox
The “large” and “unusually strong” animal that bit the head off a deer in Jægersborg Dyrehave north of Copenhagen was a dog, DNA tests have revealed.
The Danish Nature Agency (Naturstyrelsen) said on Sunday that the DNA results confirmed their original suspicions.
“We figured that it was a dog, albeit a very large one. So these new results don’t mean that we are relaxing our warnings just yet. A savage dog is considered much for dangerous to humans than a wolf,” forest manager Hans Henrik Christensen said in a statement.
See also: 'Unusually strong' animal loose near Copenhagen
Christensen said that visitors to the popular forest park should be careful and should under no circumstances let their own dogs off the leash within the park.
The nature agency says that they have police permission to shoot the stray dog.
The brutal nature of the attack, in which the deer’s head was “quite simply bitten off”, led to concerns that the wolf population that has reestablished itself in Jutland after a nearly 200-year absence had spread to the island of Zealand. As evidenced by what it did to this deer, nature authorities say the dog is dangerous. Photo: Naturstyrelsen /Frit/Scanpix