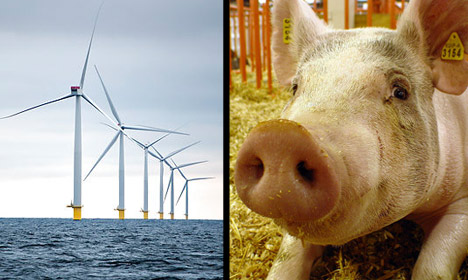 Renewable leader or dirty pig? Photo: Henning Bagger/Scanpix, Fleur Design/Flickr
Earlier this week, The Local reported that Denmark’s climate policies were declared the best in the world in the 2015 Climate Change Performance Index (CCPI).
The CCPI report, put together by the environmental organisations Climate Action Network Europe and Germanwatch, even held Denmark up as a model for other nations, writing that the Danes show “how industrialised countries can not only promise, but also implement effective climate protection policies.”
See also: Denmark has world's best climate policy
In the same story, we referred to a study from the World Wildlife Fund (WWF) that had a much different take on Denmark’s climate and environmental impact. In that report, Denmark was ranked as having the world’s fourth largest ecological footprint per capita, behind only the oil-producing states of Kuwait, Qatar and the United Arab Emirates.
How can two reports from seemingly like-minded organisations come to such dramatically different conclusions? We spoke with Søren Dyck-Madsen, the head of the Danish Ecological Council (Det Økologiske Råd), and Hanne Jersild, a senior consultant with WWF Denmark, to try to make sense of it.
“It’s about what you measure – and how,” Dyck-Madsen told The Local.
“The CCPI measures the emission of greenhouse gases ‘the Kyoto way’, i.e. it calculates what is emitted from the activities within Denmark, but without including the import and export of goods. Denmark imports a lot of energy-intensive goods from abroad, most often from China, but those are counted toward the Chinese emissions,” he continued.
Jersild also stressed that the reports represent “two completely different analyses”.
“When the CCPI gives Denmark the top spot, that is largely due to the fact that we have an ambitious climate and energy policy, with strong targets and policies for renewable energy and energy efficiency – policies that make Denmark a frontrunner internationally,” Jersild told The Local.
See also: Denmark has world's fourth largest ecological footprint
“The perspective in the WWF Living Planet report is much broader – that is to say it looks at factors beyond climate and energy policy. What constitutes a country’s ‘ecological footprint’ isn’t just climate-related,” she added.
Jersild said that there is some “uncertainty” about Denmark’s fourth-place ranking in the Living Planet report.
“Even though there is no doubt that Denmark is among the countries in the world that leaves the biggest ecological footprint per capita – in part because of our meat consumption – it is hard to say whether the fourth place ranking is accurate. That’s because the report’s methodology includes some uncertainties that affect the rankings of countries like Denmark that have extensive foreign trade,” Jersild said, adding that Denmark could actually be a bit further down the list, “for example at tenth place”.
Dyck-Madsen agreed that Denmark’s foreign trade played a key role in the high ranking in the WWF’s global footprint report.
“[In the global footprint report], import is very heavily weighted. Soya for pig feed counts a lot, clothes count a lot, as do total imports as a whole,” he said.
While Dyck-Madsen stressed that he was unfamiliar with the WWF’s exact methods, he said that the two seemingly conflicting results could come down to the difference between setting ambitious goals and getting people to follow them.
“You can perhaps also say that the CCPI measures those areas in which government has the ability to act, while the footprint is a much better gauge for measuring those things that governments cannot affect but that are rather determined by consumers,” Dyck-Madsen added.