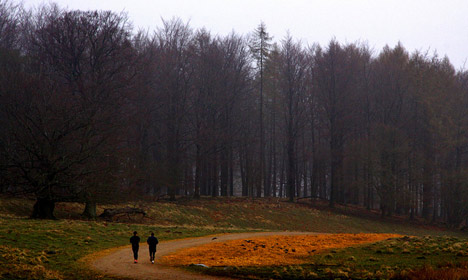 Be wary if you plan to visit Dyrehaven. Photo: Guillaume Baviere/Flickr
Authorities have warned that a “large” and “unusually strong” animal is on the loose north of Copenhagen.
A deer calf was found in the forest park Jægersborg Dyrehave with its head bitten off and the Danish Nature Agency (Naturstyrelsen) says that only “an unusually large and strong dog, or a wolf” could have bitten the head off in that fashion.
“We feel that it is in the public’s interest [to know about the animal, ed.] and we recommend using real caution if visitors encounter a stay dog out here [in Dyrehaven, ed.],” forest manager Hans Henrik Christensen told BT.
“We have simply never seen this kind of bite before and we have taken samples from the dead deer and have sent them for DNA tests to see if this could be a wolf,” Christensen said.
The deer’s head has not been found and Christensen said the bite was “exceptionally violent”.
“The animal bit through the neck bones, so the head was quite simply bitten off,” he told BT.
See also: The wolf has officially returned to Denmark
The Danish Nature Agency expects the DNA results to be back by the end of the weekend. If it turns out to be a wolf, hunters have a green light to shoot to kill.
“It’s not possible to have a wolf in Dyrehaven. So it will be put down if we find one. But our theory is that it is a stray dog, even though it must be a very big and strong one,” he said.
Wolves have returned to Denmark after a nearly two century absence, but have thus far only been spotted in Jutland. Officials said they have never seen a bite like this one. Photo: Naturstyrelsen/Frit/Scanpix