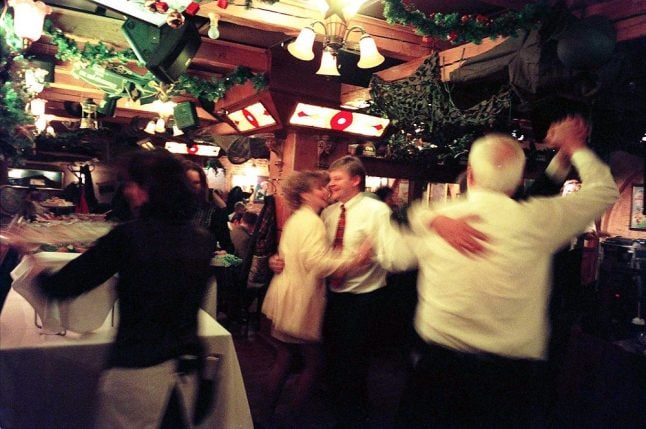 A classic julefrokost. Photo: Henning Bagger/Ritzau Scanpix
Ah, the julefrokost. There's really nothing like it. A Danish Christmas party is a one-of-a-kind mixture of holiday cheer, excessive drinking and the release of a year's worth of pent-up feelings.
Before you head out to your office's Danish Christmas party this year, you may want a refresher on doing Christmas the Danish way.
Whether it's mastering the fine art of fighting over useless trinkets to knowing which plate is for what, these tips will help turn you in to a real julefrokost pro.
1. Arrive on time Photo: Jens Nørgaard Larsen/Ritzau Scanpix
If the julefrokost invitation says it starts at 5pm, it starts at 5pm. No sauntering in fashionably late, no arriving five minutes early. You come at 5pm, even if that means a walk around the block to time it just right.
2. Shake everyone’s hand Former Denmark and Faroe Islands prime ministers Anders Fogh Rasmussen (R) and Joannes Eidesgaard, not prior to a julefrokost, as far as we know. Photo: Keld Navntoft/Ritzau Scanpix
Upon entering on time, you then need to shake everyone’s hand and look them in the eye as you say your name and they say theirs. Never mind the fact that you will forget 80 percent of them by the time you’ve finished the circuit (multiple Magnuses and Mettes are almost a certainty), this is just what you do, no matter how awkward it looks.
3. Wow them with your Danish Photo: Morten Overgaard/Polfoto/Ritzau
No matter where you land on the Danish scale, be sure to break out your skills. If you’re a total newcomer, the Danes will feign amazement at a simple ‘Hvordan går det?’ If you’re more advanced than that though, be careful: Once you display a certain level of Danish, you may not be able to successfully switch back over to English (at least not until everyone is drunk – which shouldn’t take long).
4. Say yes to the schnapps Photo: Ole Steen/Polfoto/Ritzau
Christmas parties and schnapps go together like jam and pungent cheese – that is to say, they are a terrible combination for everyone except the Danes, who think nothing of downing numerous schnapps in the company of their colleagues and boss, a practice that may seem fraught with pitfalls to the non-Dane. You will be offered schnapps throughout the night, and while you may be tempted to say no every time it might be a good idea to give in to every fifth or sixth offer, just to show you’re trying.
5. Be prepared to do a LOT of sitting Photo: a0peter/Flickr
Once the opening pleasantries, hand-shaking and awkwardness concludes, you’ll be guided to the dinner table. If seating is optional (although to be honest, it probably won’t be) scope out a good spot, because you are going to be there for a looooong time.
Danish dinner parties are colossal sit-a-thons, but the julefrokost can often take it to new, butt-numbing levels. If it’s a larger party and you missed shaking a hand or two at entry, make sure you shake hands with those sitting in your immediate vicinity. After all, you’re going to be next to them for a dreadfully long time so you might as well start it off right.
6. Learn the eating routine Photo: Jens Nørgaard Larsen/Ritzau Scanpix
When you sit down, you’re likely to find one plate stacked upon the other. That’s because the Danes have a lot of rules about the order in which things are eaten and the proper combination of foods. Piling up your first plate with meat and sides is a real rookie mistake. That top plate, you see, is for the fish.
The logic (if there is any to be found) is that you don’t want the remains of your salmon and curried herring mixing with the endless array of pork products that you will pile up on your next trip to the buffet line. Danes also tend to scoff at putting the wrong thing on the wrong bread, so pro tip: put the herring on rugbrød (rye bread) and only rugbrød.
7. Choose your underwear carefully Photo: Michael Probst/AP/Ritzau
Mention julefrokost to anyone in Denmark and you’re likely to hear a wisecrack about infidelity. And behind those jokes are cold hard facts: a survey in 2012 revealed that every fifth Dane has gotten busy with a colleague at a julefrokost and that five percent of Danes in relationships have cheated on their partner at a Christmas party.
So pick your undies carefully before you leave – putting on your best pair might be a good idea if you’re single because hey, you might be showing them off later. For those in committed relationships, selecting a sexy pair may lead to suspicion and jealousy before you even get out the door.
8. Prepare to see grown-ups battle over worthless trinkets A julefrokost standard is the game pakkeleg, in which every guest brings a wrapped present that usually costs no more than 50 kroner (about seven euros). The presents are put in the centre of the table and then you take turns rolling dice. Roll a six and you get a present.
While that sounds innocuous enough, things ratchet up to a new level in round two (keep in mind how many schnapps and glasses of wine have been downed by this point). In this round, when you roll a six you get to take someone else’s present, leading to all sorts of scheming and plotting that inevitably ends with everyone opening the presents they fought so hard for only to realise that it's a bunch of useless crap.
9. Be ready to see a brand new side of your colleagues Photo: Holger Damgaard/Polfoto/Ritzau
Christmas parties tend to bring Danes out of their shell. You’ll see coworkers cutting a rug on the dance floor, you might have one express their admiration of you as they hug you just a little too close, while another might tell you that they have hated you from the moment they first laid eyes on your smug little face. Your boss might offer you a hit off his joint and the two quiet accountants might sneak off into the copy room together to do God knows what. Emotions are high, drinks are flowing and inhibitions are down, which can make for a highly amusing combination.
10. Remember that everything will be back to normal the next day Photo: Mads Nissen/Polfoto/Ritzau
Did you see Jens puke onto Marie? Did Troels make out with Claus? Were you a little bit too honest when you told your boss what you think of her? Pssht, none of this matters. A julefrokost is like a get out of jail free card. Basically anything goes, and no one holds a grudge or is overly judgmental. So go with the flow, have a good time and enjoy the season. And if your julefrokost doesn’t quite live up to the shenanigans listed here, perhaps you need a more exciting workplace or more interesting friends. Either that, or we have completely over-exaggerated for effect – but we wouldn’t do that, would we? God jul!
READ ALSO: Coca-Cola's Christmas truck is coming to Danish towns
A previous version of this article was originally published on December 10th, 2014. 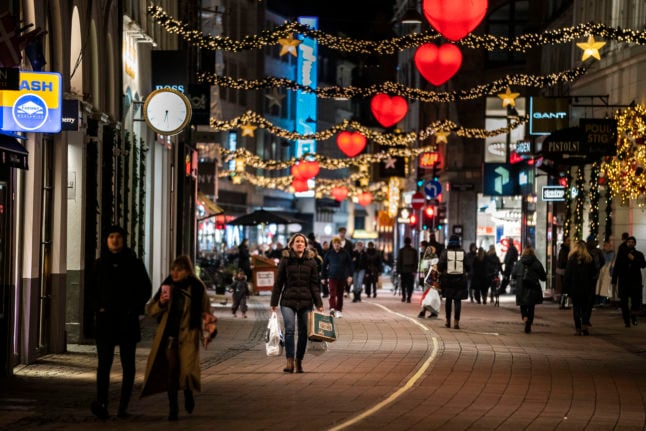