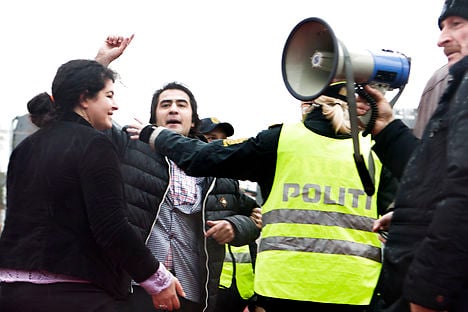 A Hizb ut-Tahrir supporter is removed from a demonstration against the group's 'Proud of Sharia' meeting in Copenhagen on Sunday. Photo: Linda Kastrup/Scanpix
Hizb ut-Tahrir’s ‘Proud of Sharia’ (Stolt over sharia) meeting in Nørrebrohallen gathered members and supporters of the international Islamic group, which openly supports the establishment of a caliphate and is listed as one of five Muslim extremist groups operating in Denmark.
The meeting addressed the City of Copenhagen’s proposed integration plan, which has a stated goal of getting “the number of Copenhageners who support Sharia Law to fall”.
Hizb ut-Tahrir has positioned the city’s strategy as “an attack against Islam and Muslims” and held its meeting on Sunday to express their support for implementing Sharia Law.
“We in Hizb ut-Tahrir have a stated goal of protecting Islam and getting Muslims to adhere to their values. We have therefore repeatedly revealed Danish politicians’ attacks against Islam and Muslims, and this time is no exception,” the group wrote on its website.
A counter-protest outside of the Hizb ut-Tahrir meeting included appearances by local politician Lars Aslan Rasmussen, and Venstre MP Inger Støjberg, who earlier this year created controversy by proposing that immigrants from predominately Muslim countries should have a more difficult time entering Denmark.
Rasmussen said he was there to show that many in the local community are firmly against Hizb ut-Tahrir and their Islamic message.
“For me, it is important to show that there is another Nørrebro, that cannot accept the things that Hizb ut-Tahrir stands for. But as long as they are a legal organisation, we politicians unfortunately cannot do anything,” he told TV2 News.
During the counter demonstration, Hizb ut-Tahrir  supporters disrupted Støjberg’s remarks by shouting “Legalise Sharia”. 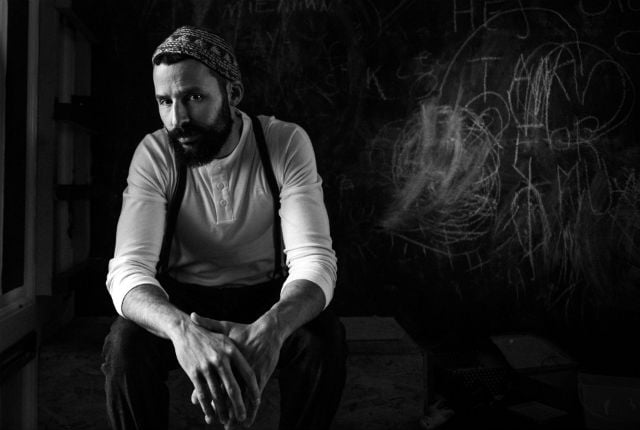