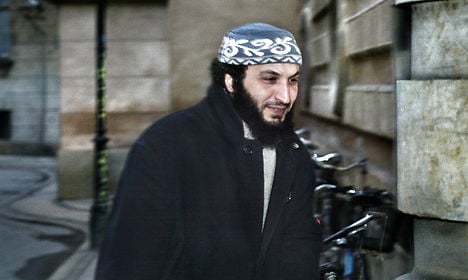 This is the second terror conviction for Sam Mansour, shown here in 2003. Photo: Rune Feldt/Scanpix
Sam Mansour, aka ‘The Bookseller from Brønshøj’, was found guilty of inciting terror by a Frederiksberg court on Thursday.
The 54-year-old Danish-Moroccan Mansour was also found guilty of a racism charge for threats made against Jews and two well-known Danes who are critical of Islam. One of them was cartoonist Kurt Westergaard, who drew the inflammatory caricature of the prophet Muhammad published by Jyllands-Posten newspaper. The other was Morten Storm, the biker turned radical jihadist turned secret agent who came out of protective hiding to give fiery testimony against Mansour.
See also: Morten Storm gives fiery testimony in terror case
He was acquitted on charges related to the editing and publishing of three books that were seen as terrorist propaganda.
In addition to the threats, Mansour posted screeds, photos, links and messages online that praise Osama bin Laden and call on his readers to join al-Qaeda’s al-Nusra front. He has also posted videos of soldiers being executed in Syria and Iraq.
Mansour and his lawyer argued that he was merely expressing his right to free speech with the material.
“He has expressed himself on religious matters and that is his right within the framework of free speech. He doesn’t deny that he has published books and other things but everyone has the right to express strange opinions,” Thorkild Høyer told Ritzau news agency when the trial got underway last month.
See also: New trial for 'al-Qaeda's PR man' in Denmark
This marks the second time that Mansour has been convicted on terror charges. Mansour’s 2007 conviction marked the first time in Danish history that an individual was convicted of inciting terrorism. He served 3.5 years in prison on the previous conviction.
The four year sentence was substantially lower than the nine years demanded by prosecutors, who contend that Mansour serves as al-Qaeda’s de facto ‘PR man’ within Denmark. The court also rejected the prosecution's call for Mansour to lose his Danish citizenship.