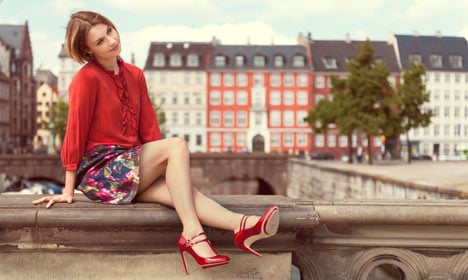 Frederikke Schmidt said she was tired of choosing between style and comfort. Photo: Roccamore
Frederikke Schmidt has been designing shoes for six years. She loves wearing high heels but not the foot aches and bone problems that come with it, so she decided to do something about it with the launch of her own shoe brand, Roccamore
How did you come up with this business idea?
Roccamore is a new, Danish shoe brand with an innovative concept: beautiful and comfortable high heels. It all started when I was working as a freelance designer for brands like MaxMara, Shiatzy Chen and Icone Shoes in Italy. I would always wear high heels that would torture my feet. I was tired of choosing between style and comfort. I wanted shoes that would fit my lifestyle. So, I spent the last three years designing and developing a special ergonomic insole in collaboration with an orthopaedic shoemaker.
The insole built-in to Roccamore shoes supports the foot and helps it become anatomically-correct when women walk in them.
You’re funding your project through Kickstarter – how is that going?
It has been a crazy ride; wonderful, inspiring and scary – all at the same time. For the week leading to our Kickstarter campaign launch on November 10, I had hardly slept as there was so much work to be done. And then in the first 17 minutes of the launch, 12 shoes were sold. Then it stopped.
I remember thinking, “What if only 12 people in the whole world think this is a good idea?” I was so scared but also completely worn out. So, I just dozed off for 11 hours. When I woke up, Roccamore shoes were selling like hot cakes.
Around the same time, we were approached by a really big trend house that wanted to sell Roccamore in Scandinavia and now we are in the final stages of closing a deal with them. That's really exciting. I cannot wait to see Roccamore in the stores next year.

Are you an entrepreneur in Denmark? Contact us and we might feature your story.
What challenges are you expecting post-launch? How are you gearing up to face them?
Well, it's always a challenge to start up something new. I am sure the production won't go as smoothly as I would like, but I am trying to think ahead as much as I can. We started taking orders once we hit 100 percent of our funding requirement on Kickstarter and I am getting the production ready in Alicante.
A big challenge has been the sizes, but we have made a size chart based on the measurement of the foot and I spent a lot of time helping our backers find the right size.
Any personal reflections and/or message to other 'kickstarters'?
We wanted to create a brand together with our users and give them the chance to be part of the entire process, including collaborating with them on the design of our 'look book' and model selection, so it seemed like the obvious next step was to do a Kickstarter campaign. Everything was decided together with the users, who also chose the four designs selling on Kickstarter currently.
We strive to keep an ongoing dialogue with as many cool women as possible and really listen to what they want, so that the design reflects their needs and desires. For instance, we had a lot of people asking us to add a flat shoe to the collection. I have just designed two new flat styles and asked our backers which one they would like us to produce. Maybe that could be an inspiration for other upcoming startups.