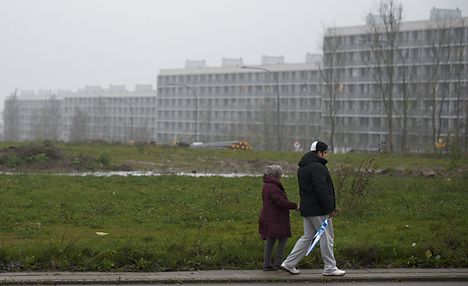 Gellerupparken in Aarhus is one of Denmark's poorest neighbourhoods and is only a short walk from the controversial Grimhøj mosque. Photo: Bjorn Lindgren/AFP/Scanpix
How do you turn around a young man who is determined to destroy the West? In Aarhus, you take him to a cafe or a public library and talk about football.
This is the softly-softly approach of Mads, a mentor in an innovative programme to deradicalise young Muslim men who might otherwise turn to violence.
"The guy I'm working with now really wanted to go to Syria," said Mads, who is in his early 30s but asked not to be identified any further for fear of compromising his work.
"My aim is not to disconnect the religion, because I think it's fine that he's religious. But it's about obtaining a balance," he added.
See also: Danes fighting for Isis in Syria on welfare benefits
Belying its reputation as a harmonious, wealthy country, Denmark has the second largest number of foreign fighters in Syria relative to its size among Western nations, behind only Belgium, according to an estimate by The Economist magazine.
The young men Mads works with grew up in places like the sprawling Gellerupparken, a dreary housing estate where four out of five are from immigrant homes.
With its graffiti, crumbling concrete and broken glass it is a far cry from Denmark's wealthy image — and only a short walk from Grimhøj mosque, which has gained notoriety for refusing to denounce the ultra-radical Islamic State (Isis).
This may help explain why in a city like Aarhus, with just 324,000 residents, as many as 30 people have gone to fight in Syria.
100 Danish combatants
At least 100 Danes have taken part in Syria's bloody civil war, according to estimates by the Danish Security and Intelligence Service (PET). At least 16 have been killed, and roughly 50 have returned home.
Faced with this challenge, Denmark is offering rehabilitation programmes to would-be fighters — and most controversially of all, even helps those returning from Syria.
A young man who came back from Syria was "shaken" and had seen things "that weren't quite normal for a regular young Danish guy," Mads said. The two started out by talking about football. But the real objective was to prevent him from returning to Syria, and to motivate him to finish his education.
See also: Danish jihadist approach under US media scrutiny
"Those were our primary targets, and they succeeded," Mads said, with a hint of pride.
It is part of a two-pronged approach — slapping travel bans on radicalised youths and jailing them if they break them, but also investing in preventive measures.
Aarhus was the first Danish city to launch an anti-radicalisation scheme in 2007. Anyone can be referred to the scheme by family, friends or police, social workers and youth club leaders. After a risk assessment, the person is offered counselling, a mentorship programme and help with getting an education or a job, and finding housing.
"The one I have now I helped with writing applications for part-time work, and we went out and delivered them together," said Mads. They have also tried to bond by going to the library together.
Dispiriting slog
The mentors meet their charges once or twice a week on average, and it can be a dispiriting slog.
After meeting regularly since March, the boy Mads currently works with threatened to leave for Syria a few weeks ago. This may reflect the difficulty of competing with organised religion and its lure of camaraderie, a sense of meaning — and ultimately salvation.
And that's not the only challenge the Aarhus programme is facing. It regularly takes flak from politicians who believe the battle against extremism is best fought in the courts.
After it emerged that its staff cited real or perceived discrimination as a factor in becoming radicalised, some lawmakers reacted strongly.
Martin Geertsen of the main opposition party Venstre said he wants to avoid a situation where society "feels sorry" for people who should really be punished.
In Belgium, Europe's largest exporter of foreign fighters to Syria per capita, a court has ordered that 46 suspected members of an Islamist group believed to be involved in sending young fighters to the country to stand trial.
Denmark, in contrast, has yet to charge anyone because while fighters who go to Syria may have violated anti-terrorism laws, securing evidence in the war-torn country is difficult, experts say.
Toke Agerschou, who heads the crime prevention effort by the city's schools, social services and police, said he was a pragmatist who was open to trying any deradicalisation method that worked, including confiscating passports.
"You have to take your punishment in a society governed by law," he said, but added that prison largely had "the opposite effect."
Since the Aarhus project began it has received around 130 enquiries about radicalisation. Most were offered advice. In 15 cases people were offered, and accepted, a mentorship programme, out of which eight have been completed successfully — one "with limited success" — while seven are ongoing.
"You can liken it to a divorce," said Agerschou. "It's rarely something that goes away immediately, it might take months and years."