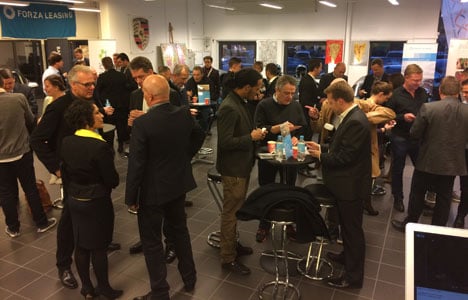 Meet over Coffee held its first formal networking event in Hillerød. Photo: Sparsh Sharma
Meet Over Coffee (MoC) organized its first formal event for business to business networking in Hillerød on November 27th. Around 250 people attended – mostly senior level executives.
The speakers at the event were Hillerød Mayor Dorte Meldgaard, Liberal Alliance party leader Anders Samuelsen, MoC founder Henrik Ørum Nissen and Ironman competitor Gert Rune.
Meldgaard spoke about how networking can strengthen local businesses and boost local economies. She emphasized the need to have a network in order to succeed, especially in business.
See also: 'It's not work when you're passionate about it'
Rune, who lost one of his legs to bone cancer at the age of 16, shared the story of his inspiring journey of overcoming his handicap and becoming an Ironman.
Samuelsen talked about how his networking skills helped him launch Liberal Alliance, while Nissen spoke about the need to get out of one's comfort zone.
"You should change your approach to networking. 'What can I do for you' should set the meeting's agenda instead of 'What can I get out of this meeting'. The best way to network is to give more than you ask from others," he said.
The event employed different ways for people to introduce themselves to most other attendees.
"I learnt more about ways to network and made many new connections by attending this event. That's what I like about the Meet Over Coffee initiative – it's a professional network and helpful for those operating in the B2B space like me," Thomas Svingfors Olesen, who came from Frederikssund, told The Local.
We're interested in highlighting your event. To promote an upcoming event, please provide a preview within a week before it takes place. To give a recap of a recent event, please send us a write-up and photos within three days after the event. In both cases, the text shouldn't exceed 300 words. Send submissions to [email protected]