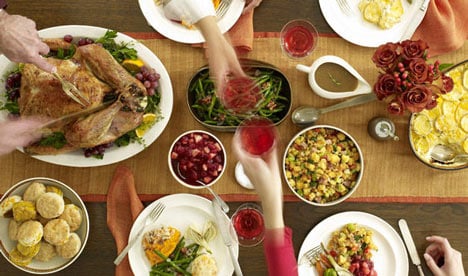 It may not be exactly the same as back home, but many Americans continue to celebrate Thanksgiving in Denmark. Photo: Satya Murthy/Flickr
For the vast majority of Danish households, Thursday will be nothing more than yet another drab November day.
But for the thousands of US citizens who call Denmark home, Thursday presents a unique cultural challenge: how to celebrate the major American holiday Thanksgiving in a Danish setting.
The approaches to Thanksgiving among the Americans that The Local spoke with were as varying as the reasons that brought them to Denmark in the first place.
See also: US citizens get 1 in 8 Danish residence permits
Some do their best to introduce the custom to their Danish friends and family while others find it difficult to keep the American tradition alive – at least on the right day.
“Years ago, some American friends and I decided to celebrate Thanksgiving and invite our Danish friends. We were living in Aarhus and we had a great time. Then a week went by and my parents called to wish me a happy Thanksgiving! We had accidentally celebrated a week earlier – at least we got the Thursday part right,” Kelly Anne Keenan Fjelstrup said.
For some Americans, it’s all about introducing Thanksgiving to as many people as possible.
“I try to invite someone new each year to give them the experience. The hard thing is, how do you not invite past guests, as they really look forward to it,” Annie St. John Hansen said.
Hansen is not the only American whose Danish guests have embraced Thanksgiving.
“My husband has a cousin that is literally obsessed with Thanksgiving after having it with us, as our some of his friends. He's got another one who lived in the States for a year and enjoyed it so much that she celebrates it with her own family. My husband’s immediate family could take it or leave it though,” said Sarah Casey Rasmussen.
See also: Danes adopt American Black Friday 'holiday'
“I’ve never invited my Danish in-laws for Thanksgiving – it’s never even occurred to me!” said Mississippi native Jeanne Thames.
“We always celebrate with other American-Danish couples and their kids. It has been fabulous every year, and my dear friend will never live down putting a little too much Jack Daniel's in the sweet potato casserole one year,” she added.
But for others it just becomes too difficult to keep Thanksgiving going so far from home.
“I'm sorry to say that I've stopped doing Thanksgiving since divorcing. It’s just not the same in Denmark for me,” JA Searle said.
As for the undersigned, I put the finishing touches on this article as the smell of pumpkin pie filled my suburban Copenhagen home. Although I’ve been lucky enough to be back home in the States for two of the five Thanksgivings during my time in Denmark, I look forward to once again having my Danish in-laws over to share this special day with me. But they better not eat all of my green bean casserole!
Note to readers: This article was originally published on November 27, 2014.