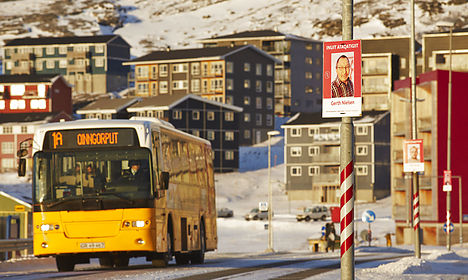 Election posters fill Nuuk as Greenlanders prepare to vote on Friday. Photo: Ulrik Bang/Scanpix
Greenland voters are on Friday expected to focus on the Arctic territory's economic future rather than independence from Denmark, in a snap election prompted by a corruption scandal.
"The theme of the last election was very much: 'How do we progress towards independence?' and more specifically: 'How do we kick start the mining industry?'" said Ulrik Pram Gad, a University of Copenhagen researcher specialising in Greenlandic politics.
"This time the election is much more down to earth. It's about economic policy," he said.
Former Prime Minister Aleqa Hammond's coalition collapsed in September after a parliamentary audit committee report found that she had used 106,363 kroner (14,300 euros, $17,800) of government funds to cover private expenses like family members' airline tickets and hotel mini-bar costs.
See also: Greenland calls election amid expenses scandal
She rode to power on a wave of nationalistic sentiment in March last year amid hopes that the vast island's natural resources, including uranium, rare earths and oil, would be enough to pay for full independence.
In the latest poll, the leftist Inuit Ataqatigiit (IA) party has a narrow lead over social democratic Siumut, but whether or not it gets a parliamentary majority could be determined by the populist Partii Naleraq, launched by former Prime Minister Hans Enoksen earlier this year.
During Hammond's tenure a narrow majority in parliament lifted a ban on mining uranium, but her government was accused of rushing through the decision and criticised by environmental groups who say it could threaten the Arctic's ecological system.
IA wants to hold a referendum on reinstating the ban, and its leader Sara Olsvig has said that regardless of the outcome she will try to block a project in south Greenland that could become one of the world's largest uranium mines.
Corruption and nepotism
Meanwhile, Siumut, now led by the well-respected Kim Kielsen, a former police officer, appears to have downplayed the importance of uranium mining to the economy.
Corruption and nepotism have marred Greenlandic politics since the granting of home rule in 1979, but the popularity of Facebook has created an unparalleled platform for political debate in a sparsely populated territory with limited media channels. Facebook discussions helped fuel an angry demonstration in Nuuk that preceded Hammond's ouster, seen by many as a sign that the political culture was changing. However, the unprecedented protest failed to make corruption a main theme of the campaign.
Rather, politicians have treated the scandal "very much as a personal problem for Aleqa Hammond," said Gad.
Greenland is largely self governing but Denmark maintains control over foreign affairs and defence policy, and subsidises the territory's 13.8 billion kroner economy with an annual 3.3 billion kroner block grant.
"The country is in need of more private enterprise," said Jakob Janussen, a political scientist who headed the Commission on Self-Governance of Greenland.
In January a study concluded that Greenland's underground wealth would not be enough to wean the economy off its annual subsidy from Copenhagen for the forseeable future.
"Even though natural resource exploitation will become important for Greenland, it is not enough," Minik Rosing, a geology professor at the University of Copenhagen and the chairman of the University of Greenland, wrote.
In October last year, Britain's London Mining became the first company to be awarded a major exploitation license in the autonomous territory after the government approved an iron extraction project. A year later the group collapsed as the Ebola outbreak in Sierra Leone hit activity at its only mine, which was already reeling from plunging iron ore prices.
Urge for quick fixes
For Nuuk, falling commodity prices have made it harder to raise capital for other mining projects.
Greenland has an aging population of just 57,000, and emigration last year reached a 20-year high as many of the young people who leave for Denmark to study choose to stay there due to better job prospects.
The public sector makes up more than half of Greenland's economic output, and fisheries account for 90 percent of exports. How to diversify the economy has been a key issue during this campaign, with the biggest party hoping to double the tourism sector.
Economic debate has also focused on the redistribution of wealth between the capital and rural areas, and between rich and poor, Gad said.
He added that for the vast majority of Greenland's politicians, the independence issue had not gone away, but simply been put on the back burner due to more pressing economic challenges.
The dream of an independent nation state was what had prompted "a sustained urge for quick fixes to the Greenlandic economy" over the past 20 years, such as mining projects, or "rather weird (ones) like selling seal meat sausages to China," he said.
"This is not the end of Greenlandic nationalism," he said.