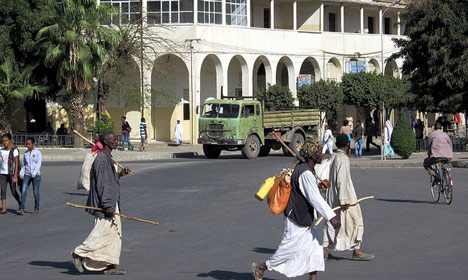 The Danish Immigration Service spent over two weeks in Eritrea on a fact finding mission. Photo: David Stanley/Flickr
A massive increase in refugees from Eritrea earlier this year led Denmark to put a halt to asylum for Eritreans until the Danish Immigration Service (Udlændingestyrelsen) could evaluate the reason for the sharp uptick.
The results of the Immigration Service’s investigation have now been delivered to the Justice Ministry and Eritreans will once again be eligible for asylum in Denmark – but under much tougher criteria than before.
The Justice Ministry said in a press release on Tuesday that Eritreans will no longer be automatically granted asylum if they came to Denmark to flee their home country’s authoritarian rule and compulsory military service.
Instead, Eritreans will need to show that they face a personal threat in order to be granted asylum in Denmark.
See also: Human trafficking feared behind asylum boom
The UN reported in 2013 that Eritreans subject to conscription into national service risked retribution and even possible death if they fled the country. But the Immigration Service’s three-week fact finding mission concluded that an alleged shoot-to-kill policy targeting Eritreans who illegally leave the country “might have been party true previously but … people are no longer being shot at just because they try to cross the border into Ethiopia”.
Immigration Service also said that international reports of up to 10,000 political prisoners in Eritrea “is difficult to harmonize with the reality on the ground”.
The extensive fact finding report indicates that the human rights situation in Eritrea may not be as bad as rumoured, thus Denmark will no longer give blanket asylum to Eritreans.
“The report gives new and relevant information on the asylum situation in relation to Eritrea. The report shows that there was a need for updated information and that it was necessary for Immigration Service to carry out a fact finding mission,” Justice Minister Mette Frederiksen said.
Frederiksen wouldn’t comment directly on what would happen to the some 1,400 Eritreans who have been waiting in Danish asylum centres for their cases to be processed.
“As justice minister, I don’t have the competence to rule on concrete asylum cases. At the end of the day it will be Flygtningenævnet [the Danish Refugee Appeals Board, ed.] that will apply the meaning of this new information on Eritrea to the actual asylum cases,” Frederiksen said.
Throughout the first quarter of 2014, roughly ten Eritrean asylum seekers arrived in Denmark each month. In July, that number jumped to 510, leading the then justice minister, Karen Hækkerup, to put asylum for Eritreans on hold pending the Immigration Service’s findings.
According to Politiken, Eritreans make up the second-largest group of refugees in Denmark this year behind Syrians.
The Danish Immigration Service's fact finding report on Eritrea is available here (in English).