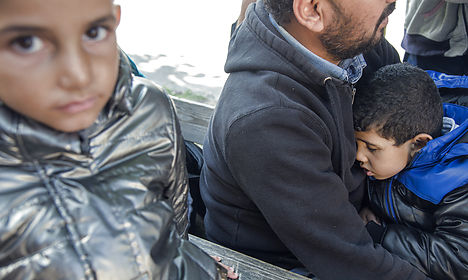 Refugees wait to be processed at Center Sandholm in Birkerød. Photo: Nikolai Linares/Scanpix
Some municipalities tell the Danish Immigration Service (Udlændingestyrelsen) not to send them refugees from certain countries, Berlingske newspaper revealed.
Chechens are a particularly unwanted group, with the municipalities of Haderslev, Skive and Brønderslev all telling Immigration Services not to send them any more.
“We don’t have the group [Chechens, ed.] and we don’t want them either based on the experiences of the surrounding municipalities,” Brønderslev wrote in a ‘priority request’ to Immigration Service according to Berlingske.
“We have had bad experiences with integrating Chechens. We currently have quite a few Chechens in Skive Council but the majority of them are difficult to integrate and many have moved away,” Skive wrote to Immigration Service.
“Haderslev Council cannot accommodate more Chechens,” that municipality wrote.
Another unwanted group is the Roma. Sønderborg Council told Immigration Service that it “wants to put an end to the visitation of Roma people from the former Yugoslavia who come on humanitarian grounds”.
Danish municipalities provide requests and recommendations to Immigration Service each year as a way to build upon previous successes with certain groups, but many of the municipalities also use the annual exercise as an opportunity to tell the national authorities which refugees they do not want.
This would appear to be in violation of the nation’s immigration laws which state that no distinctions can be made based on nationality when helping those in need.
At the Danish Red Cross, general secretary Anders Ladekarl said it makes sense that municipalities would try to specialise in housing a certain group of immigrants, but stressed that everyone should be welcome.
“No one should be turned away. Passive racism cannot be involved when it’s time to add up the numbers,” he told Berlingske.
Immigration lawyer Bjørn Dilou Jacobsen told Berlingske that the municipalities’ ‘negative lists’ could be in violation of the law.
“As a starting point, one should never discriminate based on race or ethnicity. When you discriminate indirectly it must be impartial and proportionate, not just the argument that some types of people are difficult to integrate,” he said.
The mayors of Brønderslev, Sønderborg, Haderslev and Skive rejected the notion that they are discriminating against anyone, and an Immigration Service spokeswoman told Berlingske that her agency does not give much consideration to the municipalities’ ‘negative lists’.