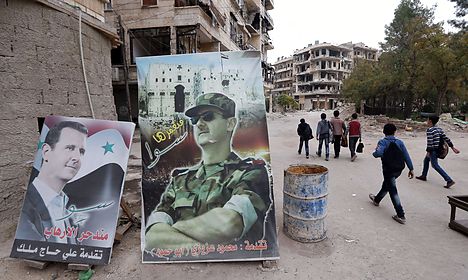 The head of the Danish-Syrian Association says tensions are mounting within Denmark between pro-Assad and pro-Isis factions. Photo: Joseph Eid
Mohammad Mahfoud told broadcaster DR that as the head of the Danish-Syrian Association he supports President Bashar al-Assad and is against Isis. And that, he said, has led to confrontations and threats that he says will only get worse.
Mahfoud recounted an incident in which he was eating at a popular kebab restaurant in Copenhagen’s Nørrebro district last year when two cars filled with 8-10 Isis supporters pulled up and eyed Mahfoud through the restaurant’s window.
The men came in and a confrontation quickly ensued in which one of the men threatened to behead Mahfoud on the spot. When Mahfoud’s friends came to his defence, the confrontation became more intense before the Isis supporters were forced to leave. Before driving off, they removed an Isis flag from the trunk of their car and waved it at Mahfoud while gesturing that they would slit his throat.
Mahfoud said the incident represents a current trend within elements of Denmark's Muslim community.
“People are becoming more and more religious. There is more talk about religion and more extremism," he told DR.
In another example of Isis supporters created trouble in Copenhagen’s streets, a protest by Danish Kurds in August was interrupted by a pro-Isis supporter. The Kurdish protesters quickly ran after the man’s vehicle and attempted to pull him out. The entire incident was caught on video:
See also: Kurds march against Isis in Copenhagen
Another example of the Syrian conflict playing out in Denmark centres around the controversial website Syrienblog.net, which publicly outs suspected Danish jihadists.
In April, a house in Skanderborg was shot at by unknown gunman who were acting on information posted on Facebook by a young Danish Muslim who claimed to know who was behind Syrienblog. The man listed the address and even a photo of the house, claiming to have proof that it served as the headquarters for Syrienblog.
But after the shooting, in which no one was hurt, Politiken newspaper discovered that the information likely came from the IP tracking site ip-tracker.org. There was just one problem: IP searches for other random sites, including those of the Justice Ministry and Berlingske newspaper, also pointed to the same red house outside of Skanderborg.
See also: Danish mosque declares support for Isis
After the failed attack on the site’s operators, Syrienblog in turn is offering a 50,000 kroner reward for information on who was behind the shooting. The site vows to “find those responsible and hold them accountable”.
The Danish-Syrian Association’s chairman said that people on both sides of the Syrian conflict are becoming more extreme in their actions in Denmark.
“The situation is becoming more intense and I personally think it is only a matter of time before something serious happens here in Denmark,” Mahfoud told DR.