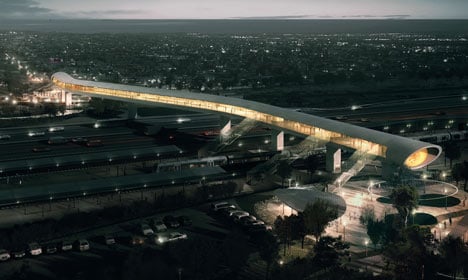 Køge North Station will stretch across two freeways. Illustration: COBE / Dissing+Weitling
The Danish architecture firms COBE and Dissing+Weitling, along with the Danish engineering company COWI, beat out Japanese and French entries to win the right to design and build Køge North Station, a coming super station south of Copenhagen that will be a hub for local and high-speed regional trains.
The project includes a 225-metre pedestrian bridge that stretches over two freeways, a state-of-the-art train station and waiting area as well as a park and ride facility.
Køge North Station will connect Denmark’s busiest freeway with the existing S-train network as well as a new double-tracked rail line for high-speed trains. When it is completed in 2018, the station is expected to play into the commute of around 8,000 users each day.
PHOTO GALLERY: See what Køge North Station will look like
“Køge North Station is a very unique project, both in terms of architecture and engineering. The station will be part of many people’s everyday life. In our work we have focused on the flow across the freeway – from west to east and east to west. The difference between the open side in the north and the closed side in the south. Vista and intimacy. Movement and repose. The experience, atmosphere and joy of travelling,” Steen Savery Trojaborg, the CEO of Dissing+Weitling said in a press release.
Dissing+Weitling is also behind Copenhagen’s new internationally-acclaimed cycling bridge, Cykelslangen, and one of the most striking elements of Køge North Station is the pedestrian bridge that will carry commuters over the busy freeway below.
“The pedestrian bridge is an elegant, simple and 225-metre long steel construction with a light superstructure. It spans the freeway with a simple grip and is developed with great consideration to creating the best possible traffic flow for the freeway, local trains and high-speed trains,” COWI vice president Jens Sandager Jensen said.
See the photos here.