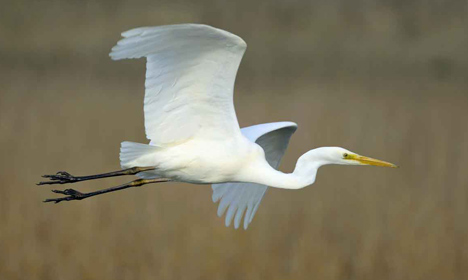 The great egret is one of the birds that has settled in to the Danish nature. Photo: John Larsen
Eight new bird breeds call Denmark home, the Danish Ornithological Society (Dansk Ornitologisk Forening – DOF) discovered in its first comprehensive bird-mapping project since 1996.
More than 1,000 ornithologists have spent much of the year working on DOF’s Atlas III project, the first overview of Denmark’s bird breeds since 1996.
The eight newcomers to Denmark are: bee-eaters, golden eagles, two-barred (or white-winged) crossbills, great white egrets, red-crested pochards, peregrine falcons, Caspian terns and Egyptian geese.
PHOTO GALLERY: See all the new birds here
Some of the birds have sought refuge in Denmark due to climate change.
“The bee-eater, red-crested pochard and the egret have moved north in recent years. Climate change in the form of warmer weather is part of the explanation for the new species establishing themselves in the Danish nature and the breeds have also settled in in other northern European countries,” DOF biologist Iben Hove Sørensen said.
“On the other hand, we view the introduction of the golden eagles and peregrine falcons as an expression for the better understanding and greater protection offered to birds of prey in recent decades. Fewer toxins in the environment have also been beneficial to the birds of prey,” Sørensen said.
See also: Denmark's white-tailed eagles are soaring back
Not all of the newcomers are welcome guests, however. DOF says that the Egyptian goose is an invasive species that has spread from captivity.
A video about DOF’s Atlas III project can be seen below (in Danish):