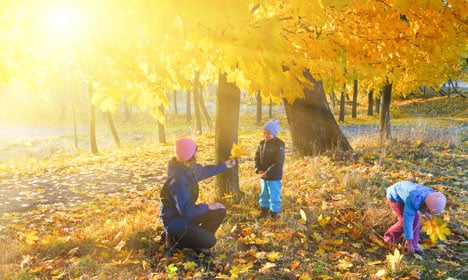 Only 2006 had a warmer autumn. Photo: Colourbox
With an estimated average temperature of 11.5C for September through November, DMI is predicting that autumn 2014 will end just behind 2006’s 12.2C record as the warmest autumn ever. The third warmest autumn was in 1949, with an average of 11.0C.

Denmark uses the meteorological definition of seasons, meaning that autumn officially runs from September 1st through November 30th as opposed to beginning on the autumnal equinox and ending on the winter solstice as in some other countries.

DMI predicts that the November’s average temperature will be 7.7C, keeping 2014 on pace to top 2007 as the hottest year in Danish recorded history.

2007 ended with an average temperature of 9.5C and DMI predicts that when 2014 draws to a close, the average temperature will have been between 9.6 and 9.8C.
But lest one get the impression that the Danish weather has suddenly turned tropical, Thursday morning saw temperatures drop below freezing for the first time this season and Thursday also marks the last day in which there will be more than eight hours of daylight until things turn around again after the winter solstice.
DMI is calling for winter weather that will also be slightly above normal.
“The final month of autumn and the first two months of winter look like they will end mild, with temperatures 1-1.5 degrees above the norm,” the meteorologists wrote in their long-term forecast.
“From the end of November and especially in December there will however be an increasing risk that cool and easterly winds will give us a cold spell or two. They will likely be of limited duration, however,” the forecast continues.