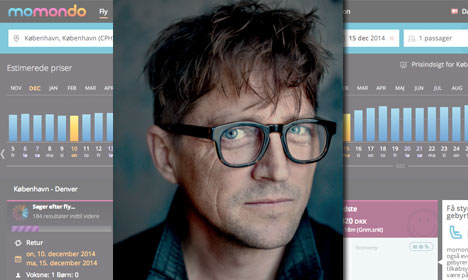 Thorvald Stigsen founded Momondo in 2006 and sold it to an investor in 2011. Photo: Submitted/Screen shot
Thorvald Stigsen was born in India's IT capital of Bangalore and spent his childhood there and in Uganda. Possessing a unique mix of creative intuition and mathematical skills from his background in IT programming and modern theatre, he helped lay the foundation for Scandinavia's first major player in the online flight comparison marketplace.
Working with a team of coders, he established Momondo in 2006 as a free, independent online flight search website offering full price transparency across the market. It continues to be a leading travel search engine globally.
How did you come up with this business idea?
I had founded Skygate, a travel solutions company for large corporations, in 1992. Skygate managed clients' corporate travel budgets and designed point of sales and customer relationship management systems for big business travel agencies.
At that time, the airline industry was dominated by big players who sold directly and through travel agencies. After a few years, the European Union liberalised the airline industry and as a result, the airfares as well. New private airlines came in where once only the national carriers operated. The former started disrupting the industry with their cost advantages. Many of these new lean start-ups started selling online directly to flyers, forcing the nationalised carriers to follow in their footsteps.
We were operating in a B2B market but decided to go B2C. At the same time, American companies, like Sidestep and Kayak, had become very popular in the US using similar business models. I decided to invest in a new search technology in 2003. It was finally developed and launched in 2006.
Are you an entrepreneur in Denmark? Contact us and we might feature your story
What were the initial challenges? How did you overcome them?
Around the turn of the millennium, the IT bubble had burst, leading to a lot of tech employees getting fired globally. In 2001, a similar German startup went bust. I too had to fire a lot of people from Skygate to balance costs.
To start up Momondo, I invested three million kroner from my company funds. It was difficult for me to fail. I had to perform and take calculated risks. There was no other way it could be. Thus, I developed the ruthlessness needed to grow. Many other entrepreneurs just keep looking for others' money, and once they have that, they don't develop the same ruthlessness as they would if they invested their own money.
How has the journey been so far?
Working with only two developers at a very early stage to form the basic engine that would power Momondo of today was a big achievement. All big companies develop a kernel of the system in the first two to three months and, more often than not, with just two to three people.  To have that great team in place is the first milestone. One doesn't need a big load of money; only a small team of people passionate about an idea.
I remember a particular incident during our initial phase, when we got TV coverage from national broadcaster DR. Suddenly, our number of hits rose from an average of five thousand per day to fifty thousand per day. The system collapsed. We had to bike around in Copenhagen and buy servers to build up our capacity. Later, we were also lucky to get coverage in CNN, which gave a great boost to our international growth.
In 2011, I decided to sell Momondo to a strategic investor, who wants to further expand it and has the capacity to take it to the next phase of growth. Knowing where to stop and letting others take over is an important milestone, I think.
How has becoming an entrepreneur changed you personally?
The entrepreneurial spirit is all about manic dedication and passion for your idea. You develop a nerdish focus. It was a great ride and I have had a good portion of luck in my success. Success, per se, is not fulfilling – passion is. That's why I want to continue working with those who are similarly passionate for creating something good and not in it only for the money. Money does not create passion, ideas do.
Any other personal reflections and/ or message to budding entrepreneurs?
While starting up, you will meet a lot of sceptics because you don't have anything to show. There will be times when you see right while others see wrong.
Many startups may have a great idea but don't get into the right momentum as they are stuck with problems in hiring, funding or serving smaller markets. This makes for a good excuse to not focus on the core reason they started up.
Also, one of the striving forces behind several entrepreneurs is that it makes them feel unique and grand, which is a shallow goal in itself, and hardly satisfactory. A great idea is worth nothing more than a good bottle of wine. What makes all the difference is realising the idea. True entrepreneurs do not accept failure; they don't fear problems. However, Danish startups lack persistence. Seventy percent shut down in two years. It seems like there is no real passion or idea driving most of them.
Another advantage that many fail to see is that in Denmark, the domestic coverage is very cheap compared to places like London or Berlin. For a low price, you can cover the entire market. Also, good infrastructure is available and Danes are early adopters of new technology.