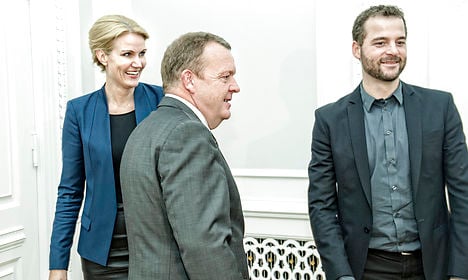 PM Helle Thorning-Schmidt, opposition leader Lars Løkke Rasmussen and Economy Minister Morten Østergaard met on the opt-out on Tuesday. Photo: Jens Nørgaard Larsen/Scanpix
When Denmark holds its first referendum on its relationship to the EU since 2000, it appears likely that Danes will vote in favour of ending one of its three EU opt-outs.
An opinion poll conducted for Jyllands-Posten newspaper found that 55.3 percent of Danes are ready to end Denmark’s EU justice opt-out and instead replace it with an ‘opt-in’ model.
“Danes are ready to drop the justice opt-out so therefore we owe them an broad political deal to deliver a referendum and an agreement on what Denmark should choose to accept in the EU cooperation,” Foreign Minister Martin Lidegaard told Jyllands-Posten.
In her opening address to parliament in October, PM Helle Thorning-Schmidt said she was ready to commit to a referendum on the opt-out but not until after the next parliamentary elections, which she must call no later than September 2015.
See also: Denmark to vote on EU justice opt-out
With poll after poll showing that Thorning-Schmidt is unlikely to remain in the prime minister’s office following the next election, opposition leader Lars Løkke Rasmussen of Venstre has agreed to call a referendum if he takes power.
On Tuesday, the two leaders agreed on details of the eventual referendum, including a provision that would grant political parties veto power on certain opt-in elements.
Saying he feared that a left-wing government could eventually “sell out” Denmark’s immigration policies, Rasmussen said having veto rights was essential to committing to the referendum.
“If there isn’t a veto right in relation to our asylum and refugee policies, then you can forget about a referendum,” Rasmussen told broadcaster DR.
Although both Thorning-Schmidt and Rasmussen – as well as Rasmussen's predecessor Anders Fogh Rasmussen – have promised EU referendums before, they have never made it to the ballot.
The situation is now viewed as critical, however, with Denmark facing exclusion from Europol due to the opt-out.
Thorning-Schmidt has said that leaving Europol “will be a serious problem for Danes’ security and safety”.
Denmark was granted four opt-outs from the 1992 Maastricht Treaty: defence, justice and home affairs, the maintaining of the kroner rather than the euro and an opt-out on citizenship rules that was cancelled out by the Amsterdam Treaty that took effect in 1999.