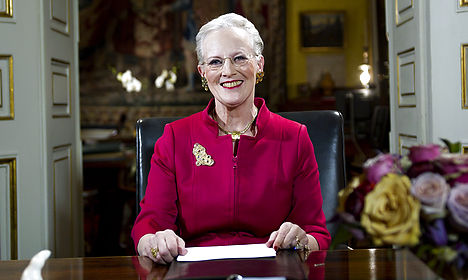 For the first time since 1980, the backdrop to the queen's annual speech will not look like this. Photo: Keld Navntoft/Scanpix
Queen Margrethe's annual New Year's Eve address, which serves as a fixed part in the New Year’s festivities of Danes worldwide, will be delivered from Fredensborg Palace in northern Zealand, the Royal House announced in a press release.
The reason for the break in tradition is that the roof of the Royal Couple’s regular winter home, Amalienborg Castle in Copenhagen, is being repaired. Queen Margrethe and Prince Consort Henrik are taking up residence in Fredensborg Castle until the work is done.
The last time the queen addressed her people on New Year’s Eve from anywhere other than Amalienborg was in 1980. Then, like now, renovations caused the royals to temporarily relocate to Fredensborg.
Queen Margrethe’s New Year’s Eve address is transmitted live on radio, TV and online every December 31st at precisely 6pm. For many in Denmark – and the Danes who tune in online from abroad – the transition into the new year simply isn’t complete until the queen finishes her speech with the words “God save Denmark.”