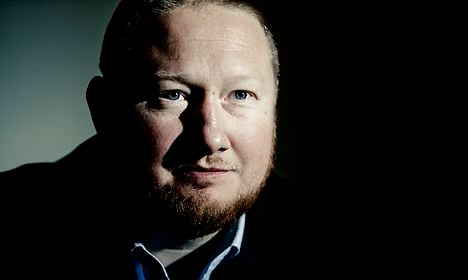 Morten Storm came out of hiding to testify in a terror case. Photo: Malte Kristiansen/Scanpix
Morten Storm, the former biker turned radical jihadist turned secret agent, has made few friends in the radical Islam community since he shared his remarkable story with the world in 2012. In a Frederiksberg courtroom on Monday, Storm managed to further enrage Muslims by insulting the prophet Muhammad.
Storm’s story made global headlines when he stepped forward to reveal that for years he had worked as a secret agent with both the Danish intelligence agency PET and the American CIA.
Storm, who grew up in the small Zealand town of Korsør, says that after he got out of prison and converted to Islam, he was able to infiltrate the inner circles of the terrorist organisation al-Qaeda and help the US kill American-born terrorist Anwar al-Awlaki by helping the CIA track his movements.
Storm has had to go into hiding since going public with his story but on Tuesday he appeared in court to testify against Sam Mansour, a Danish-Moroccan citizen accused of inciting terror by publishing and promoting terrorist works.
In court, Storm testified about his online interactions with Mansour, known in Denmark as ‘The Bookseller from Brønshøj’. Storm said that Mansour sent him private messages on Facebook after Storm changed his profile picture to the controversial Kurt Westergaard drawing of Muhammad wearing a bomb as a turban. After Storm responded that Muhammad was “a paedophile and a jerk”, he says that he and Mansour traded online insults that culminated in Mansour posting a photo of Storm with the text ‘Wanted Dead or Alive’.
As Storm recounted the exchange, the court proceedings were disrupted several times by angry Mansour supporters.
According to Politiken, when Storm began explaining that the prophet Muhammad married a 6-year-old girl when he was 56 and had sex with her when she was nine, Muslims in the room yelled derogatory comments at Storm. Politiken said that among Mansour’s supporters were three women covered in head-to-toe niqabs and seven men with long Salafist beards.
Part of the correspondence between Storm and Mansour included the latter writing that Storm “will be tortured and go to hell”.
“The masters you serve will not be able to save you,” Mansour wrote before adding that “the Muslims are ready to kill you”.
Storm said that he has received numerous death threats since sharing his story, which was detailed in full in the best-selling book Agent Storm: My Life Inside al-Qaeda and the CIA.
“I can’t even live in Denmark because of people like Mansour and his supporters out there,” Storm said in court according to Politiken’s report.
The case against Mansour continued on Tuesday and a verdict is expected on December 4th. Prosecutors are pushing for a nine year prison sentence followed by expulsion and a revocation of Mansour's Danish passport, a punishment the courts rejected when Mansour was convicted on similar charges in 2007.