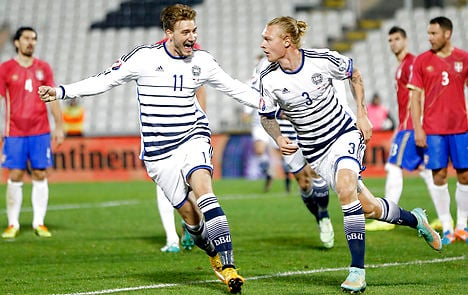 Denmark's Simon Kjaer (R) celebrates his goal agianst Serbia with teammate Nicklas Bendtner during their Euro 2016 Group I qualifying match in Belgrade. Photo: Marko Djurica/Scanpix
After Serbia’s Zoran Tosic put his club up 1-0 just four minutes into play, Danish striker Nicklas Bendnter equalised at the hour mark and again in the match’s waning minutes, while defender Simon Kjær added another to move Denmark to the top of Group I with seven points in four games.
The match was played in front of an empty stadium after Serbia and Albania’s qualifier last month in Belgrade's Partizan Stadium was cancelled shortly after a drone flew over the pitch flying a nationalistic flag depicting so-called Greater Albania. Serbia's Stefan Mitrovic grabbed the flag while it was still hanging in the air before clashing with Albanian players – scenes that rapidly spread to the remaining of the pitch and into the stands. The game was cancelled and governing body Uefa declared it a 3-0 loss for Albania while also stripping Serbia of three points and decreeing that its next two home matches would be played in front of empty stands.
Denmark’s national coach Morten Olsen was thrilled with his club’s come from behind win.
"We have a bad habit of falling behind and all is well when you score three to turn the game around, but we have to be more focused in the early stages," he said at a post-game press conference.
Denmark sits one point above Portugal in group standings.