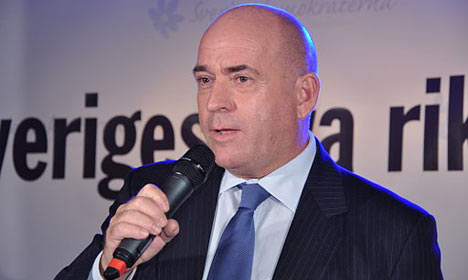 Søren Espersen, seen here at a Sweden Democrats election event, says he faced death threats on Facebook. Photo: Janwikifoto/WikiMedia Commons
Søren Espersen of the Danish People’s Party (DF) wrote his final Facebook update on Thursday, saying that death threats and abuse have become too much for him.
“The reason I am stopping on Facebook is that although there have been many good, friendly and interesting comments, which I am thankful for, there have also been – sadly enough – daily daily threats over the past years on Facebook, including those aimed at myself and my wife,” Espersen wrote.
The DF veteran said that it wasn’t just the threats, but also the overall tone on Facebook that is leading him to shut down his page.
“On top of that, there have been droves of primitive expletives. From time to time, I have used hours removing them, but I don’t want to deal with it any more. I am by a nature a happy soul, and with this decision I look forward to some happier days,” the 61-year-old wrote.

Screen shot of Søren Espersen's final Facebook update
Espersen’s withdrawal from Facebook comes in the midst of a national focus on the daily abuse faced by many Danish women in the public eye. A new programme on DR2 entitled Ti Stille Kvinde (Shut up, woman) is exposing the crude and abusive tone that women face online and features leading politicians like Red-Green Alliance (Enhedslisten) spokeswoman Johanne Schmidt-Nielsen, the Social Liberals’ (Radikale) Zenia Stampe and the Socialist People’s Party’s Özlem Cekic.
See also: Danish women subjected to online abuse
In the programme’s second episode, which can be seen here, Stampe shared some of the hateful and abusive comments that she received on Facebook after she shared the news that her child died after being born early. Stampe also revealed that she withdrew from her post as the immigration spokesperson for the Social Liberals (Radikale) because the online abuse became too overwhelming.
The recently-launched National Party has also been inundated with online death threats, and politicians in Austria and Sweden have also been recently victimised by online abuse.