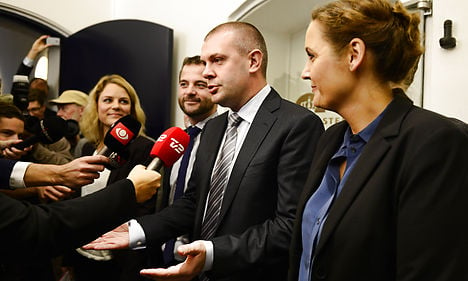 Finance Minister Bjarne Corydon announced the budget agreement on Thursday. Photo: Søren Bidstrup/Scanpix
After bits and pieces of the budget proposal, which was originally released in August, were put in place over the past few weeks, Finance Minister Bjarne Corydon presented what he called a “solidarity budget”.
“The agreement strengthens our welfare and our community in Denmark in a long line of areas. At the same time, it is economically responsible and creates more jobs and growth,” Corydon said at a press conference.
See also: Spending increase sets stage for election
Here are some of the highlights of Denmark’s 2015 budget:
Development aid and asylum
A long line of Danish NGOs heavily criticised the government’s proposal to redirect 2.5 billion kroner in foreign aid toward housing and feeding refugees in Denmark.
After negotiations with the Socialist People’s Party (SF) and the Red-Green Alliance (Enhedslisten), both of which were also vocal critics of the proposal, the government agreed to only cut one billion kroner in foreign aid and to apply 700 million kroner from Denmark’s coming EU rebate toward its increased refugee costs. The remaining 300 million kroner was moved from other areas in the budget.
See also: Danish NGOs criticise 'catastrophic' aid cuts
Additionally, the government agreed to give municipalities struggling to house refugees 250 million kroner to deal with the influx.
Daycare providers
One billion kroner will be earmarked toward hiring an additional 600 daycare workers in the nation’s public institutions. Municipalities that want a piece of the pie will have to document that the money will go directly to daycare institutions.
‘Inclusion’ in public schools
Public schools will receive 75 million kroner over three years to assist efforts to streamline special-needs students into regular classes. The money will be available in a pool so that schools can bring specially-trained teachers into the classroom and/or provide training to other teachers.
Healthcare plan
The government announced a five billion kroner plan in August aimed at improving the nation's healthcare system through better cancer treatment, early detection and the creation of new modern doctors' offices.
With the 2015 budget negotiations, the parties also agreed to set aside an additional 600 million kroner to increase staffing in maternity wards and to decrease patient overcrowding nationwide.
Eldercare
1.6 billion kroner will go toward the implementation of a ‘punch card’ ordinance for senior citizens, giving elderly residents an extra 30 minutes of in-home help each week that they can use when and how they’d like.
Nature and climate
A billion kroner will be set aside for future nature and climate initiatives in the coming year.
This follows the September announcement that the Danish government and two private foundations reached agreement on an initial 875 million kroner start capital for the long-discussed Danish Nature Fund.
See also: Denmark invests heavily in protecting nature
Social benefits changes
The government is attempting to address persistent challenges to its reform of the unemployment benefit known as dagpenge.
With the budget agreement, the parties have  agreed to put 1.5 billion kroner toward a new form of support to go toward those individuals who today neither qualify for dagpenge or the less-generous welfare benefit known as kontanthjælp.
Unemployed individuals can be on the new system for six months and receive a benefit that amounts to 60 percent of their dagpenge, or 80 percent if they are the breadwinner in the family.
A rule that said that the income of a benefit recipient’s live-in partner will affect their level of support will also be eliminated, which should increase benefits for thousands of unmarried couples. Additionally, individuals under the age of 30 will also receive a higher level of financial support.
Other initiatives
The city of Aalborg will receive a 830 million kroner boost from the state toward the establishment of a light rail system. The system is scheduled to be in place by 2021.
Municipalities were granted the right to earmark up to 25 percent of future residential building projects to affordable housing. This is seen as a particularly big deal in Copenhagen, where Mayor Frank Jensen has expressed concerns that the regular wage-earners are quickly being priced out of the city.
A mentor programme aimed at getting immigrant women into the workplace will receive two million kroner a year from 2015 to 2018. Kvinfo’s mentor programme was threatened with closure in 2013 after the government declined to continue its funding. It was given a government lifeline in January with funding to cover 2014 and the new budget agreement ensures is survival for an additional three years.
The entire budget agreement can be read here (in Danish)