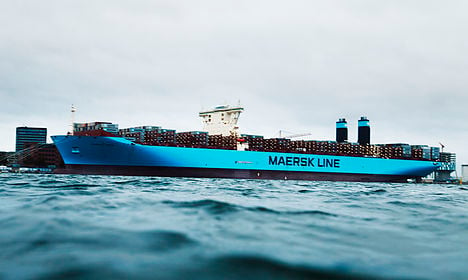 Maersk's third quarter results lacked "a wow factor", one analyst said. Photo: Kasper Palsnov/Scanpix
AP Moeller-Maersk's net profit rose 30 percent to $1.465 billion (1.18 billion euros), above a $1.36 billion consensus of analysts polled by Dow Jones Newswires, as revenue edged up 0.7 percent to $12.169 billion.
Maersk Line, seen as an international trade bellwether as it controls around 15 percent of global sea freight, raised its full-year profit guidance to above $2.0 billion from the previously stated "significantly above" last year's $1.5 billion.
"Global demand is currently being led by advanced economies while imports to emerging countries are slowing down," the group said in a statement.
The shipping unit's net profit rose by 23.6 percent to $685 million, after it lowered costs and freight rates and volumes increased.
However, in a sign that the economic outlook remains uncertain the group said global demand for shipping this year is now expected to be between three and five percent, rather than a previous forecast of between four and five percent.
The industry has been plagued by over capacity since global shipping companies expanded just as the world economy was hit by the financial crisis.
To cut costs, Maersk in July announced an alliance with shipping company MSC on some of the world's busiest cargo routes after China scuppered a planned tie-up between the two companies and France's CMA.
Maersk Oil said profit rose 17.5 percent to $222 million due to "higher entitlement production and lower exploration costs partly offset by a decrease in oil prices."
The group reiterated that it expects this year's underlying profit, which excludes discontinued operations, impairments and divestment gains, to reach $4.5 billion.
Sydbank analyst Jacob Pedersen said the results lacked "a wow factor."
"Over several quarters we have grown used to Maersk Line doing better than expected, and this quarter they're not," he told Danish news agency Ritzau.
The company's heavily weighted shares were three percent higher in midday trading on the Copenhagen bourse, helping the main index rise by 2.8 percent.