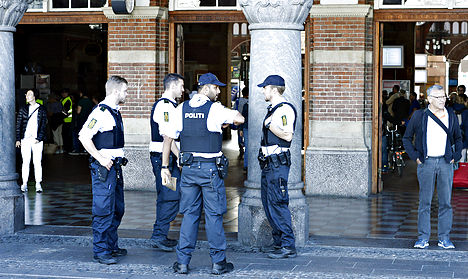 Denmark's police and military personnel have been warned to be extra vigilant. Photo: Claus Bech/Scanpix
Just weeks after a Canadian policeman was killed near that country’s parliament building and two New York City policemen were attacked with a hatchet in broad daylight, the Danish National Police (Rigspolitiet) has warned Denmark’s law enforcement personnel that they too could be targets of terror.
“Based on the latest attacks, in which uniformed police officers were targeted by unprovoked and random attacks from civilians, Rigspolitiet calls on all police districts to direct their staff’s attention to the situation,” a letter from Rigspolitiet reads, according to broadcaster DR.
“With Denmark’s participation in the the international coalition against the Islamic State and Denmark’s involvement in general, it cannot be ruled out that Danish police could be the target of similar actions,” the letter continues.
Similarly, Defence Command Denmark has also warned Danish soldiers to be extra aware of potential threats. A letter to military personnel reads that they should show awareness when encountering “unknown individuals, unidentified vehicles or objects as well as suspicious behaviour and activities, especially in connection with public and large arrangements”.
Magnus Ranstorp, a terrorism expert at the Swedish National Defence College, said that it was a wise move to tell cops and soldiers to be extra vigilant.
“There is a clear risk that Danish soldiers and police will be attacked, both because Denmark is part of the coalition against Islamic State and also because there is a significant symbolic value for terrorists to attack uniformed personnel,” Ranstorp told DR.
Despite the warnings, neither the National Police nor the Danish Defence Intelligence Service (Forsvarets Efterretningstjeneste) have changed the official threat level for the nation as a whole or for police and military in particular.