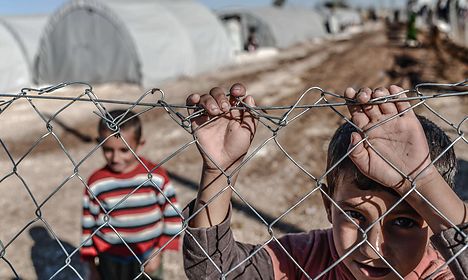 A Syrian Kurdish child looks through the fence of a refugee camp in the town of Suruc, Sanliurfa province, on November 5. Photo: Aris Messinis/Scanpix
Danes nationwide had the world’s historic refugee problem show up on their doorsteps on Sunday.
Around 16,000 volunteers went door-to-door making collections for the Danish Refugee Council's (DRC) annual campaign. And with global refugee numbers at their highest since World War II, collectors had their best result in ten years, bringing in over 16 million kroner ($2.7 million).
See also: Danish NGOs criticise 'catastrophic' aid cuts
“It is always fantastic to see so many Danes take to the streets on behalf of the world’s refugees, and the national collection has never been more important than it is right now,”
“There are 51 million refugees and displaced people in the world – the highest number since World War II – and the contributions to [Sunday’s] campaign will make a difference in local areas, including among the world’s most serious crisis points like Syria, South Sudan and and the Central African Republic,” Kamm added.
See also: Danes more welcoming of refugees than depicted
According to the DRC, for every 1,000 kroner raised it can feed two refugee families for a month.
Those who didn’t give to a collector on Sunday can still contribute to the DRC’s campaign via text message. Sending a message reading ‘Flygt50’ to 1919 will result in a 50 kroner donation.