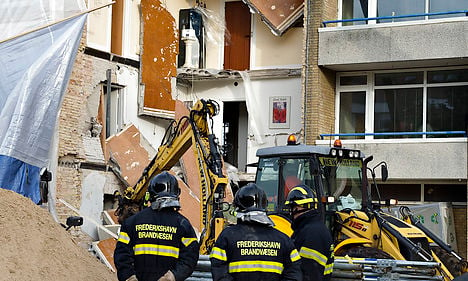 Photo: Henning Bagger/Scanpix
A four-story residential property in Frederikshavn partially collapsed on Sunday morning and at least two people had been pulled from the rubble by mid-afternoon, according to North Jutland Police.
One corner of the building, which was under renovation, collapsed around 11am.
“Two people have been pulled out of the rubble. One is seriously injured and was taken by ambulance to Aalborg University Hospital,” police spokesman Mogens Hougesen told TV2 News.
Hougesen said the second person’s injuries were not thought to be serious.
Police said that the residents were evacuated from the rest of the building and that no other people are thought to be among the rubble. Police will continue to search the area to ensure that no one else was injured.
Police are asking people to stay away from the area and a team of specialists from the Danish Emergency Management Agency (Beredskabsstyrelsen) are at the scene.