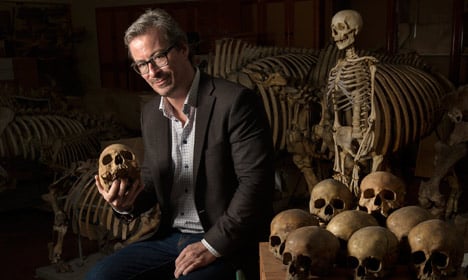 Eske Willerslev, the head of the Centre for GeoGenetics at the University of Copenhagen, led the Danish contributions to the project. PHoto: Mikal Schlosser
DNA recovered from the fossilized leg bone of a man who lived 36,000 years ago suggests early Europeans survived the Ice Age, researchers said Thursday.
The international team of scientists also said the DNA from one of the oldest known anatomically modern humans shows that interbreeding with Neanderthals took place some 54,000 years ago, far earlier than previously thought.
Researchers from the Centre for GeoGenetics at the University of Copenhagen used DNA from a fossil known as Kostenki 14 for their study, published in the US journal Science.
The hunter's genome is the second oldest ever sequenced from a modern human, and was found in what is now western Russia.
When researchers compared it other ancient human genomes, they found a "surprising" level of genetic unity that extended to first known Europeans, the researchers said in a statement.
This suggests that some "Palaeolithic hunter-gatherers with deep shared ancestry managed to survive through the Last Glacial Maximum and colonize the landmass of Europe for more than 30,000 years," the team said.
Ice sheets came and went over these tens of thousands of years, and some cultures died off entirely. However, pockets of people must have been able to survive, and continue to maintain the human population.
"We now know that no new sets of genes are coming in: these changes in survival and cultural kit are overlaid on the same biological background," said co-author Marta Mirazon Lahr, from the University of Cambridge's Leverhulme Centre for Human Evolutionary Studies. "It is only when farmers from the Near East arrived about 8,000 years ago that the structure of the European population changed significantly."
The Kostenki genome also showed a small percentage of Neanderthal genes.
Researchers have long known that some interbreeding occurred between Neanderthals and the first humans to leave Africa for Europe. But the latest study allowed a closer look at the timing of such mixing, and researchers bow believe it took place long before the European population began to separate into three distinct groups more than 36,000 years ago.
"This means that, even today, anyone with a Eurasian ancestry – from Chinese to Scandinavian and North American – has a small element of Neanderthal DNA," said the researchers.
Eske WIllerslev from the Centre for GeoGenetics at the University of Copenhagen explains the findings in the video below: