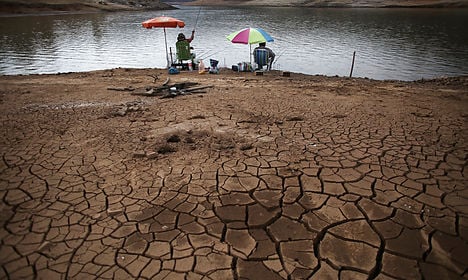 Greater water stress including both drought and flooding is one of the main risk areas. Shown here are fisherman in Nazare Paulista, Sao Paulo, which is having its worst drought in 80 years. Photo: Na
SITUATION TODAY
"Human influence on the climate system is clear, and recent anthropogenic (manmade) emissions of greenhouse gases are the highest in history. Recent climate changes have had widespread impact on human and natural systems. Warming of the climate system is unequivocal."
Since the start of the Industrial Revolution in 1750, around 2,000 billion tonnes of carbon dioxide (CO2) have been emitted. Half of manmade emissions have occurred in the last 40 years.
Levels of carbon dioxide (CO2), methane and nitrous oxide are the highest in at least 800,000 years.
From 1880-2012, the global average surface temperature rose by 0.85 degrees Celsius (1.5 degrees Fahrenheit), while the global mean sea level rose by 19 centimetres (7.6 inches) from 1901-2010.
Each of the last three decades has been successively warmer than any preceding decade since 1850. In the northern hemisphere, 1983-2012 was likely the warmest period of the last 1,400 years.
Heatwaves are more common in large parts of Europe, Asia and Australia, heavy rainfall has likely occurred more often and with greater intensity in North America and Europe.
The Greenland and Antarctic ice sheets have lost mass over the last two decades and the extent of Arctic sea ice has shrunk. Ocean acidity has risen by 26 percent since the start of the industrial era.
See also: Time running out to hit warming target: IPCC
THE FUTURE
The report uses four scenarios called Representative Concentration Pathways (RCP) based on greenhouse gas levels.
Under RCP 2.6, the lowest scenario, global average temperatures over this century are likely to rise by 0.3-1.7 C (0.5-3.1 degrees Fahrenheit), leading to between 26-55 cm in sea-level rise. Under RCP 8.5, the highest scenario, warming would be 2.6-4.8 C, causing sea-level rise of 45-82 cm.
Without additional measures to curb greenhouse gases "warming is more likely than not to exceed 4C" by 2100 over pre-industrial levels, the report says.
On present emissions trends, "warming by the end of the 21st century will lead to very high risk of severe, widespread and irreversible impacts globally."
Risks include:
— worse food security, with impacts on wheat, rice and maize harvests and fish catches
— accelerating species extinction and damage to ecosystems on which mankind depends
— migration caused by climate-related economic damage and loss of land from rising seas and storm surges
— greater water stress, especially in sub-tropical regions, but also a greater risk of flooding in northerly latitudes and the equatorial Pacific.
— risk of conflict over scarce resources and worsening health caused by heatwaves and spread of mosquito-borne disease
If CO2 emissions continue over the long term, ocean acidification and sea-level rise will continue for centuries to come. "Abrupt and irreversible ice loss from the Antarctic ice sheet is possible, but current evidence and understanding is insufficient to make a quantitative assessment," the report says.
See also: Climate change will make Denmark hotter and wetter
THE 2 C TARGET
UN members have vowed to agree an emissions-curbing pact next year to limit warming to 2 C over pre-industrial levels.
For a "likely" chance (at least 66 percent or more) of achieving 2 C, atmospheric CO2 should not exceed about 450 parts per million by 2100. This means humans can emit only around another 1,000 billion tonnes of CO2.
The report points to one pathway to reach 2 C: cut annual greenhouse gas emissions by 40-70 percent by 2050 compared with 2010, and to near zero or even below by 2100.
Reaching 450ppm would put a small brake of about 0.06 percentage points annually on growth in consumption, a measure of spending activity, which is otherwise projected to increase 1.6-3.0 percent per year over the century.
Delaying action beyond 2030 will hand on a greater bill and heftier risk to those in the second half of the century.
See also: Melting ice gives 'wake-up call' in Copenhagen
POLICY OPTIONS
"No single option is sufficient by itself," the report says, advocating a mix of measures.
Achieving the 2 C target will require a massive change in energy habits, led by a switch out of high-polluting fossil fuels.
By 2030, investment in low-carbon energy and energy efficiency in transport, industry and buildings will need to rise by several hundred billion dollars per year.
It says a carbon price "in principle… can achieve mitigation in a cost-effective way" but also notes pitfalls if the policy is poorly designed, such as cap-and-trade systems whose ceilings are too high.
Countries can shore up defences by reducing water waste and encouraging recycling, preventing settlement in climate-prone areas and conserving wetlands and mangroves, which are shields against climate stress. Preventing deforestation and encouraging afforestation are also a carbon buffer.
The IPCC highlights a potential role for carbon capture — only used so far on a pilot scale — to sequester CO2 from fossil-fuel power plants. But it dismisses "geo-engineering" proposals to reflect sunlight back into space by sowing the atmosphere with reflective particles. The cooling idea is beset by risk and ethical and governance questions, it says.
SOURCE: Intergovernmental Panel on Climate Change (IPCC), Fifth Assessment Report. Summary for Policymakers from Synthesis Report