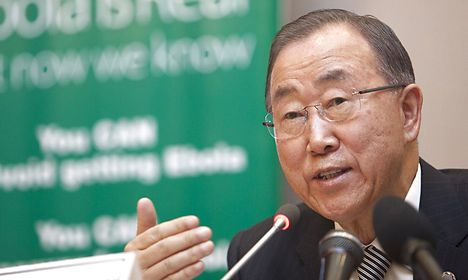 Ban Ki-moon, shown here at a press conference in Addis Ababa last week, said in Copenhagen on Sunday that he would throw his political weight beyond the IPCC report. Photo: Zacharias Abubeker/Scanpix
UN Secretary General Ban Ki-moon on Sunday threw his weight behind a massive report on climate change, saying that putting the brakes on carbon emissions would help economic growth and health.
"Human influence on the climate system is clear, and clearly growing," Ban said at a Copenhagen press conference marking the final chapter in a major report by the Intergovernmental Panel on Climate Change (IPCC).
"I am really adding my political voice to what scientists have been working very, very hard (on)," he said. "Action on climate change can contribute to economic prosperity, better health and more liveable cities."
See also: Time running out to hit warming target: IPCC
Ban has made climate change a hallmark of his tenure at the United Nations.
On September 23rd, he hosted a special summit to pique top-level interest in negotiations under the UN's Framework Convention on Climate Change (UNFCCC).
World talks have been troubled for years over which countries must shoulder the burden for reducing greenhouse-gas emissions — the heat-trapping fossil-fuel gases driving global warming.
After years of preparation, the negotiations are heading for a climax in Paris in December 2015, where the hope is to seal a global pact that will take effect from 2020.
An important stepping stone in the process will be a new round taking place in Lima from December 1-12.
UNFCCC chief Christiana Figueres said the IPCC report — issued in volumes over the last 13 months — was a powerful contribution.
"There is a strong head of positive steam building towards Lima and Paris," Figueres said in a statement.
"The IPCC has and will continue to play a crucial role in bringing forward the science upon which the transformational policies needed to realise a low-carbon, and ultimately climate-neutral world in the second half of the century, can be forged."