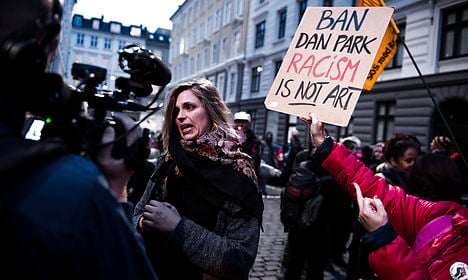 A protester expresses thoughts on both Dan Park and the Danish Free Press Society's Katrine Winkel Holm. Photo: Christian Liliendahl/Scanpix
The much-debated pictures of Malmö-based street artist Dan Park finally made their public debut on Monday.
An exhibition of Park’s nine works that were banned in Sweden and ordered to be destroyed by the Swedish state were displayed in a basement location in the Copenhagen district of Østerbro.
Greeting the exhibition’s opening was a group of protesters holding signs saying things like ‘Ban Dan Park – Racism is Not Art’ and ‘Hate Speech is Not Free Speech’.
The display of Park’s ‘forbidden’ works has been under discussion for nearly a month. First, Radio24syv was forced to give up its plans to show the pieces “at a secret location in Copenhagen”. The display was then scheduled to begin on Thursday at the Copenhagen gallery Hornsleth & Friends, but that plan too was dropped after gallery owner Kristian von Hornsleth withdrew after death threats. His gallery was also subjected to vandalism widely believed to be related to the Park exhibition. Both inside and outside of the dingy basement location, duelling signs argued the concept of 'free speech'. Photo: Christian Liliendahl/Scanpix
The display of Park’s art is being organized by the the Danish Free Press Society (Trykkefrihedsselskabet), which argues that people should be given the opportunity to see Park’s work for themselves.
“It would be a colossal defeat for the freedom of speech if violent criminals are able to stop the show. We can’t allow that, so we look forward to giving everyone the opportunity to see Dan Park’s forbidden pictures,” the Danish Free Press Society’s chairwoman Katrine Winkel Holm said last week.
On Friday, a group of activists emailed The Local to claim credit for an alternative exhibition of Park’s controversial art on Thursday night when 31 different works were applied to Hornsleth & Friends Gallery’s broken window.
“Fully in the spirit of Dan Park, this was true street art when Dan Park’s pictures were stuck to the boards that covered the gallery’s window after vandalism. The opening was well-attended and even Dan Park himself came by and expressed great satisfaction that all of his pictures made it out to the people after all,” the group wrote. A group of activists claimed credit for an alternative exhibition of Park's work in Copenhagen. Photo: Submitted
Park’s artwork was also given a more upscale reception on Thursday with a showing at Denmark’s parliament building, Christiansborg. Park himself also attended that event but was not at the Monday opening in Østerbro.
Park was convicted by a Malmö court in August on charges of inciting racial agitation and defamation and was sentenced to six months in jail. However, he was recently released from jail on appeal.
Park’s works include an image that depicts three Swedish residents with African backgrounds portrayed with nooses around their necks, a Catholic bishop receiving fellatio from a young boy and Jesus having sex with Muhammad.
The public display of ‘Sweden’s most dangerous art’ will continue in Østerbro through Friday. An offshoot of the Danish Free Press Society is also selling the banned pieces online. 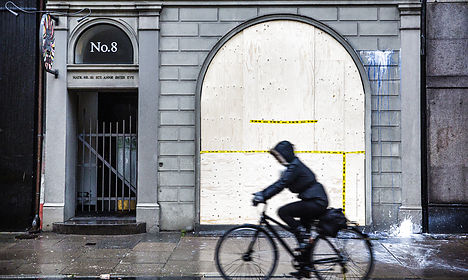 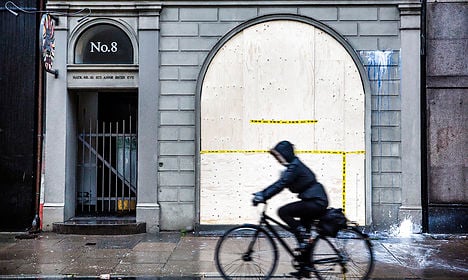 Dan Park posing with some of his controversial works in Copenhagen last October. Photo: Submitted
Malmö-based artist Dan Park was reported to the police after a recent visit to the Jutland town of Silkeborg.
Park and a team of supporters posted flyers featuring a refugee family portrayed as terrorists. The flyers, which were also distributed to private post boxes, were a recreation of the ‘Refugees Welcome’ logo.
Instead of depicting a fleeing family holding hands and running, Park’s version shows the family members clutching weapons and dragging a child who is wearing a suicide belt. The flyers read “Terrorist Welcome – bring your weapons.”