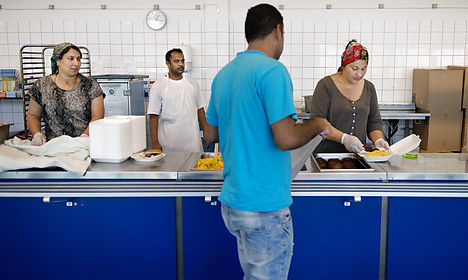 Syrian refugees are fed in the cantine of the Auderød asylum centre. Photo: Liselotte Sabroe?Scanpix
Do you know what? I think I am beginning to sense a deep sea-change (as opposed to a deep-sea change – I’m no seismologist) in the immigration/asylum debate here in Denmark. It may just be hopeful thinking on my part, of course, but finally, at last, the good guys – by which I mean the majority of ordinary Danes – are fighting back against the fear-mongering, power-hungry, opportunistic politicians.
Finally, at last, a positive message about immigration is beginning to gain traction in the conventional media, as well as on social media, a message which is being backed up by reliable statistics that prove not only that Denmark needs immigration, indeed that its very economic future relies on immigration, but that the majority of Danes are well aware of this and are more open to foreigners than the popular media myth has it.
Along with numerous reports from respected economic institutions in the last few days that detail precisely the economic benefits to a country of immigration (and which prove, for instance, that immigration does not result in lower pay for indigenous workers, and that immigrants do not take the jobs of Danes who are willing to work), there have also been encouraging reports of grass roots activities right here in Denmark.
Last week, for instance, Politiken reported from the Sønderborg municipality in Jutland, where a group of locals had managed to overcome their anxiety at the news that they would be receiving 200 Syrian asylum seekers by taking the trouble to get to know, and to an extent embrace, them.
A voluntary group of locals in the town of Nordborg have taken things into their own hands and set up a support group for the Syrian men – they are mostly men, with a handful of women – who have been temporarily quartered in their town prior to being permanently housed elsewhere across the country.
“There was a concern about what type of people they were,” said the leader of the volunteer group, unemployed local man Martin Zeissler. “Were they dangerous? Were they from Isis? That racist gene that I reckon all people have in part, sprang up in me.”
Zeissler decided to hold a local meeting to discuss the new arrivals, but instead of the meeting turning into a NIMBY-fest – an excuse to gather the pitchforks and torches – a dialogue commenced between the locals and the new arrivals.
“We asked what they needed,” Zeissler told Politiken. “And they said, ‘We want to learn Danish, we want to integrate, we want to know how to live here, and want to get to know some people’.”
Contrary to some locals’ fears, the Syrians were, in the main, well-educated – dentists, doctors, engineers, hairdressers. Soon, other locals were joining the welcoming team: “It is very simple, as far as I am concerned,” local woman Dorthe Mikkelsen told the newspaper. “In our family we have always said that you should only support and meet others with an open heart.”
Of course, not all the locals were so open, and various scurrilous rumours began to emerge about the Syrians (that they started a fight in a supermarket, for instance), all of which were soon exposed as fiction by smart use of social media. So, these days, when the Syrians are shopping in the local Netto, Nordborgers help show them how to weigh their groceries. A football team has been formed and locals have arranged Danish language classes and collected clothes and computers for the Syrians. In short, the asylum seekers are being prepared better for the time when they are distributed across Denmark by this voluntary group than they are by the well-meaning but under-resourced local authorities.
The Politiken article was titled ‘The Miracle of Nordborg’, but do you know what I think? This was no miracle. It was simply a matter of decent Danes, the silent majority as opposed to the hectoring mouth-breathing trolls who have managed to dominate the debate for far too long, doing the decent thing, just as the majority would do were they confronted with equally decent people from another country who were desperately in search of a sanctuary and a second chance.